How did you get connected to CAP?

The poet Ian Duhig: he is a very impressive poet and he is one of the few poets who has won the national poetry competition twice and his latest book has been shortlisted for all the major awards; he contacted me about the Seamus Heaney awards.

Ian was a friend of my father’s so I knew him from my childhood and he has been very kind to me about some of my poems. He suggested that I look at the Seamus Heaney Award for New Writing and enter my poems into the competition. That was in 2016.

I sent in three poems and a few months later I was contacted to let me know they were all selected for the anthology, Matter, I think it was called, and one of my poems was long listed, “Lost”. I was very happy about that.

And you kept submitting?

The next year, 2017, I was runner up with my poem “Turtle”. I attended the awards ceremony and Moyra Donaldson and Frank Ormsby were the judges. It was pretty impressive. I was surprised at how glitzy the whole event was and how serious the competition was. To win the runners up award was fantastic especially given how strong the poets were. Frank Ormsby was in the front row so I was reading and he was listening to me read.

The competition had a real impact on you?

Yes, the whole process was a real boost for me. It made me think that I really had something to offer with my writing and I think I went on with a lot of confidence from being part of the competition.

Have you ever worked for CAP as a facilitator?

Not at this point although I have done some poetry workshops with young people. I was incredibly nervous even though my Dad had gone through a few things that I could do. In the end it was a beautiful experience; I used my own poems, poems by Heaney, and we worked on poems written by the students.

It is CAP’s 20th anniversary, any thoughts?

I couldn’t believe that CAP has been going for 20 years and I really didn’t know what CAP did until I made the connection through the Seamus Heaney Awards. I know the organisation works locally, across the water and more widely internationally. What I can say is that I know the impact CAP has had on me. A lot of my friends, my poet friends, almost all of them have been published in the CAP annual poetry anthology. 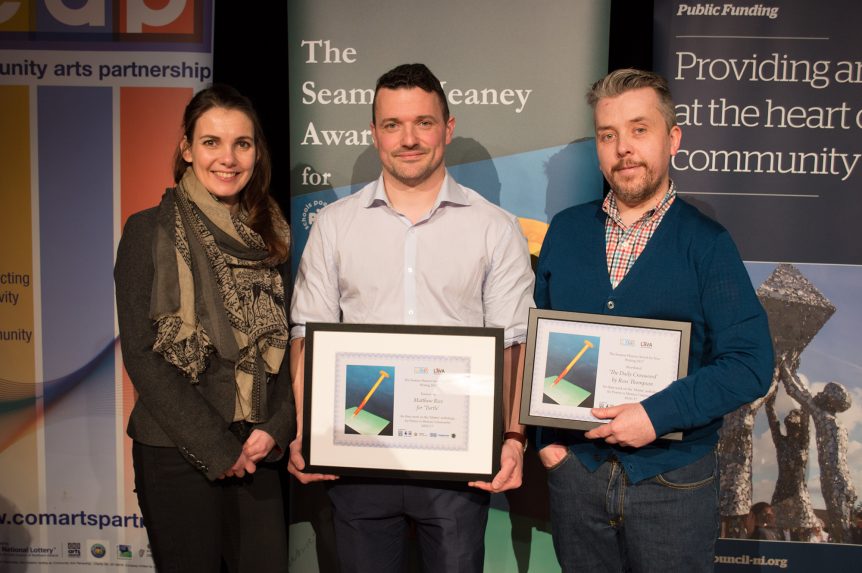 I know when I am in the library and I am looking through the old anthologies I can see poems by people that I know now because of CAP. I am certainly grateful to have been able to be part of the Seamus Heaney Award for New Writing and that was certainly a huge boost for me.

I know that isn’t the only work that CAP does, so, all in all, the organisation impresses me with the scope of the work and the quality of the work. I am glad now that Ian Duhig thought enough of the competition and of me to suggest I enter and hopefully I will have more to do with CAP in the future.