Judith Thurley lives in Co Down and published a pamphlet of poems, Listening For Hedgehogs, with Lapwing Press in 1995. She also writes non-fiction nature prose, and wrote a chapter of The Natural History of Ulster. She had a piece included in A Wilder Vein from Two Ravens Press in Ullapool in 2009.

Judith’s poetry has been published in journals and anthologies in Ireland, the UK, Canada and the US. Judith is currently editing her full poetry collection. Judith often writes in Spanish and translates this work into English.

Judith comments: “I was really pleased to be longlisted for this award. Not just because it meant validation of my work, but it was a good feeling to be part of it alongside others who submitted such strong work.

“Dragonfly came into being after spending time by a lake in Co Armagh in the height of summer. I wanted to capture the magic of that day and to communicate my fascination for that unique invertebrate, the dragonfly. I was impressed with and influenced by Francis Harvey’s poem Heron at the time, and how some fellow-creatures seem to hearken back to ancient history or pre-history. 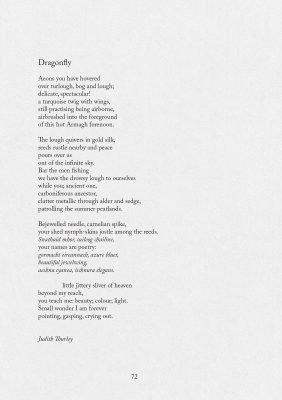 Katharine May was born in Belfast in 1961. She studied French & English at Trinity College, Dublin and emigrated to London, where she wrote for a disabled arts charity, as well as writing for and illustrating fanzines such as “Notes for Underground”. She also coproduced a community radio programme featuring women in music in S East London. Katharine returned to Ireland in the early 90’s. In 1994 she was diagnosed with Bipolar Affective Disorder and writing poetry became her tool for survival.

Katharine recently completed an M.A. in Poetry from Queens University Belfast since when she has started to get her work published by for example, Poetry Ireland, “The Blackbird” and “Abridged”. and the association with the Community Arts Partnership has helped her tolerate the terrible social isolation caused by C.O.V.D. In recent times. Thank you to all at C.A.P.! Her poem is dedicated to her Community Psychiatric Nurse, Sylvia, who lost her mother to Cancer recently. Katharine’s own mother died recently, and she is still reeling with grief and shock.

Katharine is very proud to have been long listed for the Seamus Heaney Award for New Writing 2020. 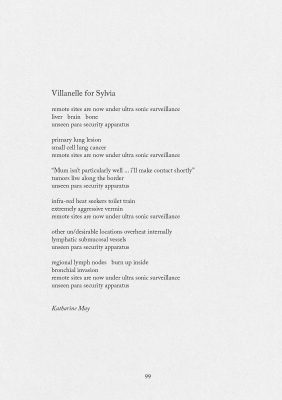 Tom Adair began writing professionally in 1970 with scripts for BBC radio—firstly, schools broadcasts, and later networked radio drama. Moving to Scotland with his wife and 3 children to teach in 1975, he worked as a schools adviser and inspector, also writing scripts for semi- dramatised television documentaries.

He gave up work in education to write full time in 1999, producing literary journalism, including book reviews and interviews with writers. Since the early 1990s he has turned increasingly to writing destination travel features for magazines and newspapers worldwide, winning awards.

Tom discontinued professional writing after the sudden death of his wife in 2016. He is self-confessedly a novice at writing ‘lines’—declining to think of this work as ‘poetry’—and was gratified and surprised to be selected for the CAP long list. He says:

“ ‘From Divis’ plays an affectionate torch beam of scrutiny on life as an only child with my greatly older, mutually disaffected parents in backstreets West Belfast in the very late 1950s. It stands alone.

“Writing anything was farthest from my schoolboyish youthful mind, though reading was seminal to my world of imagination. My education prised open a bottomless chest of treasures, beginning with books lugged home from the library, to raids on the musty emporia of Gresham Street, Winetavern Street and Smithfield. I read voraciously, and almost indiscriminately: the bedrock of my later work as a fiction reviewer. Just as radio shaped my innate inclination towards writing dialogue rather than prose, poetry seasoned my reading sensibility for the better.

“I can’t cite influences on my poetry, unless it’s to say that everything I’ve read from Humpty Dumpty to Brian Moore to Carol Ann Duffy is part of the stirfry. What I write is simply the sizzle. Not writing for money is a wonderful liberation, a chance to find out if what I do is ‘writing’ at all. And if it is, can I do it better, make it count?” 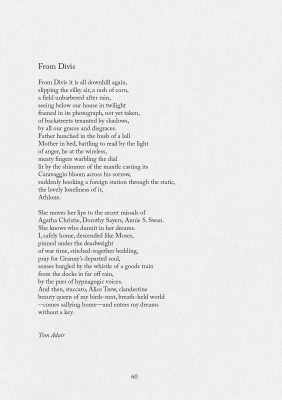 Martin Cromie revealed that “Being long-listed for the Seamus Heaney New Writing award is important to me because it is recognition that my work as a 63-year-old ‘emerging’ writer is valued by someone. It encourages me to keep writing and keep up with the plethora of very talented younger writers in Ireland.

“I mainly write creative non-fiction but am gradually veering towards poetry. My writing comes from the landscape of South Armagh, and in particular the townland of Ballinliss, my father’s ancestral ‘home place’. It is therefore not surprising that Seamus Heaney has been a massive influence since I first met him when I edited Quarto magazine at Coleraine University in 1975.

My other great literary hero is the late Tim Robinson whose Aran Islands and
Connemara books are an inspiration to anyone interested in observing the tiny details of our landscape and how that landscape makes us who we are.

Finally, I also owe a great debt to the late Ciaran Carson. He was my PhD supervisor at the Seamus Heaney Centre a few years ago. With his wonderful ear for the music of language he taught me to treat every prose sentence as a line of poetry and turned my head, my heart and my pen to the medium of poetry. 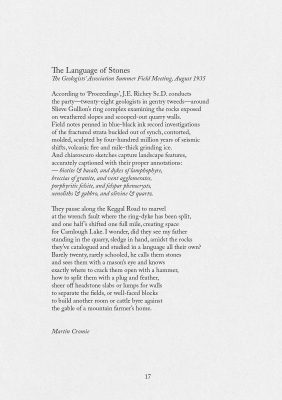 For Gaynor Kane, “Having my piece longlisted for the Seamus Heaney Award for New Writing was very validating, and it gave me a great sense of being recognised as a poet. I’d like to take this opportunity to say thank you to the judges and to everyone at the Community Arts Partnership”.

Gaynor is East Belfast born and bred, from a working-class background. She started writing at the age of 45. Since then, she has gone on to be published widely in journals and anthologies and has had some success in competitions. Her micro-collection on the early aviatrixes was published in 2018 by Hedgehog Poetry Press, who last year also published her pamphlet ‘Memory Forest’ on burial rituals and last wishes.

Gaynor’s Arts Council NI supported debut full collection ‘Venus in Pink Marble’ is due to be published in summer of 2020. You can follow her on Twitter @gaynorkane and read some poems at www.gaynorkane.com

Gaynor explains that “The longlisted poem, Duck, duck, goose, had been sitting in a notebook as a draft since early 2017 when I was inspired to write about the Shankill geese after reading some news articles. I hadn’t quite known what to do with it to make it work until I took the Prose Poetry Workshop with Kelly Creighton at the ARC, where we discussed that form in detail. It struck me afterwards, that if I removed the focus away from line endings and justified it into prose with wide margins it would look like a newspaper clipping, thereby adding an additional layer of meaning. I took it to my writing group for their critique and after some editing decided to submit it for the CAP 2020 Vision Anthology. I never for one minute thought that it was worthy of consideration for the award, and it was a very pleasant surprise when I received the notification of my longlisting.

“Duck, duck, goose is one of the poems in my debut full collection due for release this summer by Hedgehog Poetry Press. Much of the collection is inspired by place and many of the poems are set in Belfast and are a personal or social commentary on past and present issues. I mostly write poems that I have a personal connection with. Sometimes though I am inspired by art, music, workshop prompts or articles and I think it is good to research and write about things you don’t know about rather than being confined to your own experiences”. 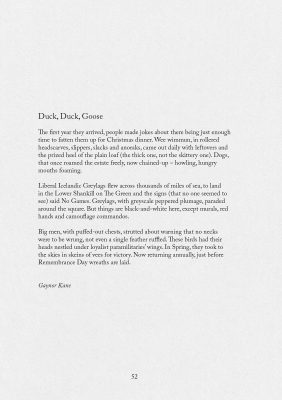