For the new edition of the Monthly, Community Arts Partnership’s arts sector magazine, produced during the Lockdown, we have this special three part presentation of the thoughts, inspirations and the poetry of the runner up and shortlisted poets for the 2020 Seamus Heaney Award for New Writing. This presentation was compiled by the Project Co-ordinator of the Poetry in Motion Project, Shelley Tracey.

Nancy Graham was a double winner of the Runner Up award, with her two poems, “Hurting as a Rule” and “Pigeon-fancier Awaits His Favourite”.

Nancy’s poems have appeared in journals such as Crannóg and Northwords Now. Nancy has had previous success in poetry competitions: she has been shortlisted for competitions including the Mairtín Crawford Award; and is a Pushcart Prize nominee for 2020.

Nancy is planning another international poetry competition soon to mark Tools for Solidarity’s 35th birthday. She works in a women’s centre.

Nancy was delighted that her poems were recognised for the Seamus Heaney Award this year:

“Since I became aware of the SHANW I’ve been submitting poems to it – how amazing to be runner-up this time! Making the film was typically imaginative of the CAP team, who have created over the years a community of poets. Lovely to feel part of it.

I came to writing poetry just a few years ago through the Open University. I am now doing my MA and would recommend this route to anyone. Poetry should hold our hearts up but also help us look outwards…to be a ‘citizen poet’, that’s the aspiration. I just need a few more decades.” 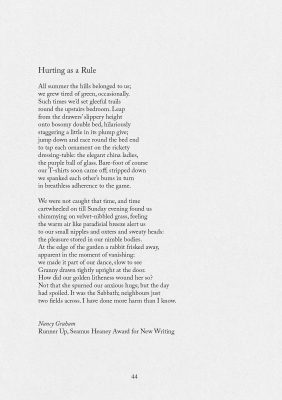 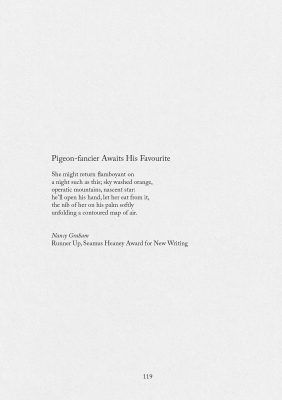 Amy Louise Wyatt is a poet, artist and lecturer from Bangor, Northern Ireland.  Her work is published in a range of Irish and international journals.  Amy was shortlisted for the Seamus Heaney Award 2018 and 2020 and The Dempsey and Windle National Poetry Day Competition 2019.  She was a finalist in The National Funeral Services Poetry Competition in 2017; and was nominated for 2019 Best of Net.  Amy won the inaugural Poetrygram Prize, 2019.  She is the founding editor of The Bangor Literary Journal. Her debut poetry pamphlet ‘A Language I Understand’ is forthcoming in late 2020 with Indigo Dreams. amylouisewyatt.com

Amy comments that “I was delighted to have my two poems initially on the longlist, and then over the moon to discover ‘Bugibba, 1984’ had been shortlisted. These poems were written about memories of my childhood, so that made the listings even more special.  In ‘Bugibba, 1984’ I explore a photograph taken of my Granda plucking a flower for me in Malta, when I was three. This image has always resonated with me and highlighted how my Granda would have done anything for me.  I found writing this poem  a comfort, since he is no longer with us.

‘My Granny’s Budgies’, my other poem, was written about my childhood memories of the two blue and green budgies that my grandparents kept. They were beautiful birds, but they were also frustrated that they couldn’t escape their confines. In this poem, I shift from my own memories, to a different perspective,  imagining myself in their position. I wanted to explore why they used to bite the hand of friendship that I offered.

Amy notes that memory plays a prominent role in her writing, in particular, the memories of my family and my childhood. I enjoy trying to make sense, through poetry, of the relationships and events on my life. Sometimes  it is only after completing a poem, that I realise the significance of that particular event in my life’.

Reflecting on making the video of her longlisted poets for the online launch of the Seamus Heaney Award for New Writing, Amy says that “it took me a long time to be comfortable in reading my poetry aloud. Recording my poems has made me feel less intimated by video as a medium. I do think it is something I will explore further, especially in these unusual days.

“In relation to the coronavirus situation, I firmly believe that poetry and the arts have played a huge part in sustaining many people in this crisis. Hopefully,  this difficult time will help us realise that the arts have an important role to play in uplifting people and offering them an outlet to express themselves.” 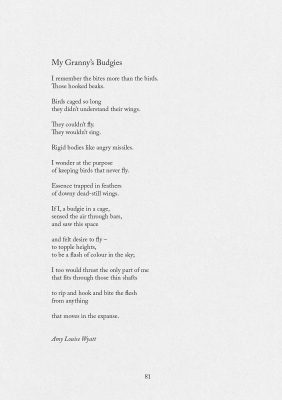 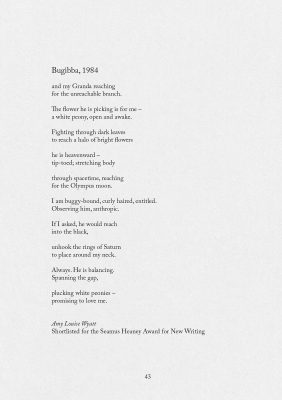 James Milliken’s poem Lichen was also shortlisted for the Seamus Heaney Award for New Writing 2020. James grew up in Bangor, Co Down, but lived much of his adult life in the Shetland Islands. He currently lives near Ballycastle, Co Antrim. His poems have appeared in The New Shetlander, Shetland Life, and the Community Arts Partnership anthologies. In 2018 his poem “Mercy killing” was shortlisted for the Seamus Heaney Poetry Award and is currently on the longlist for the 2020 award.

James is delighted that his poem was shortlisted for this year’s award. – “It is an honour and a thrill to be included among these talented people and their wonderful poems. I was in Connemara in the days before the proposed readings. I was planning to drive to Bellaghy on the morning of the event. When it was postponed,  I climbed a mountain instead with a group of archaeologists. Someone mentioned that I had been due to read a poem that evening so they asked to read it at the top of the mountain: not the Seamus Heaney Homeplace but a good second best.

The inspiration for James’s poem “Lichen” was “a photograph on my computer screen background. It was of a large rock totally covered in lichen. I had taken the photograph in a very remote area of the Shetland Isles last September. At the time of writing the poem, I was very concerned about Brexit and in particular how it would affect the Irish border and the Peace Process. (I still am.) The lichens on that rock formed an amazing patchwork of colours, not unlike a map. Lichen is a symbiosis of two or possibly more different organisms that thrive through mutually benefiting each other. It is a very complex relationship and one that is still not fully understood. I saw it as a metaphor for my concerns.

“I didn’t want the poem to be only about what one thing. I edited it to make it a bit more vague and ambiguous. Perhaps it’s a metaphor for Brexit, or for Irish history through the ages, or for humanity in an infinite universe. It’s a rock in a lonely place. It’s only some words on a page. Ultimately I would like to write poems that people can take things from, their own meanings: meanings that I don’t even see myself.

“I wrote the poem very quickly, very late at night, and read to at my writing group the next day. One of the group suggested I should submit it for CAP and the Heaney Prize. Something I hadn’t considered”. 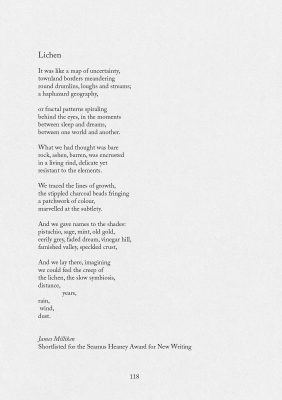