As a writer who wasn’t from Northern Ireland originally, can you tell us what brought you here, and something about your experiences of living here?

I travelled across Europe for many years and I moved to Belfast in 2013.

There are many reasons to leave. One is the impulse of curiosity and discovery. Another is the will to get rid of what is taken for granted. I came here with a postdoc fellowship. In those same years, an unthinkable number of migrants died at sea. When the death toll reached 300 (it was the ecathomb of Lampedusa, as called in italian media,) I stopped everything that was routine in my life. Everything was unbearable and I decided to go for a change:

I dropped out of university to focus on writing, and I joined volunteering groups in support and solidarity with migrants, asylum seekers and refugees. I also co-founded activist poetry initiatives and all this intense effort made me lighter, mentally and almost physically I’d say.

Coming to Belfast meant the opening of many new perspectives on the world around me, as it always happens when you come to a new country or ground. I met fantastic poets and writers, as well as amazing communities of people who welcomed me and with whom I learnt to “be the change you want to see”. I had the opportunity to facilitate creative writing workshops for cultural minorities with Nandi Jola thanks to Quotidian Word on the Street and Peace IV. All this was before the pandemic started.

The creative writing workshops for cultural minorities were one of the best times I had since I came here. It gave me the joy of gathering communities and communicating experiences of feeling different, belonging, migration and the general feeling of being in transition or displaced. We celebrated together cultural diversity, multilingualism of the many people recently arrived in NI, and differences and similarities as a way to turn barriers (at any extent, lingual, cultural etc.) into creative bridges.

Viviana, please tell us about your writing.

As a bilingual writer, actively engaged in a group visiting immigrants in detention, I write from an experiential perspective, exploring a reality that is not in the conscious awareness of the country. My writing (poetry and narrative) looks for a contemporary sense in the international context of facing Brexit and cultural barriers.

I have been working on the themes of borders (physical, mental, cultural), migration, life, and problematic contexts of women in our society. By their nature, words can break barriers down or turn them into bridges, bringing into play cultures. With poetry, borders blur; and this is not only a new existential perspective, it is also an opportunity for formal, imaginary and linguistic innovations. Domestic landscapes enter into dialogue with new spaces and with other cultures. They become a spatial multiplicity.

I think poetry is a way of challenging those words that we listen to hundreds of times (from the mouth of politicians or media) and that desensitize us. Writing is then a way of awakening but also a way to turn violence, rage, despair into transformation. Into hope.

I heard you reading your poems at an event a couple of years ago in Italian, and Maria McManus responded with translations. Can you tell us about this collaboration?

I firstly met Maria for a project of translation. We researched the possibility for poets and artists from different backgrounds and languages to work on a common idea, inspiration, topic, using different languages. Maria’s English texts are not literal translations but a wider space of creative expression.

Some of the poems we created together have been published for Dedalus Press in the anthology Writing Home: the ‘New Irish’ poets. From there on, we collaborated on many different projects, thanks to Quotidian Word on the Street, all revolving around the themes of migration, belonging, displacement, freedom of speech and how art can provide new perspectives and bridges against the many ‘walls of life’, so to say. 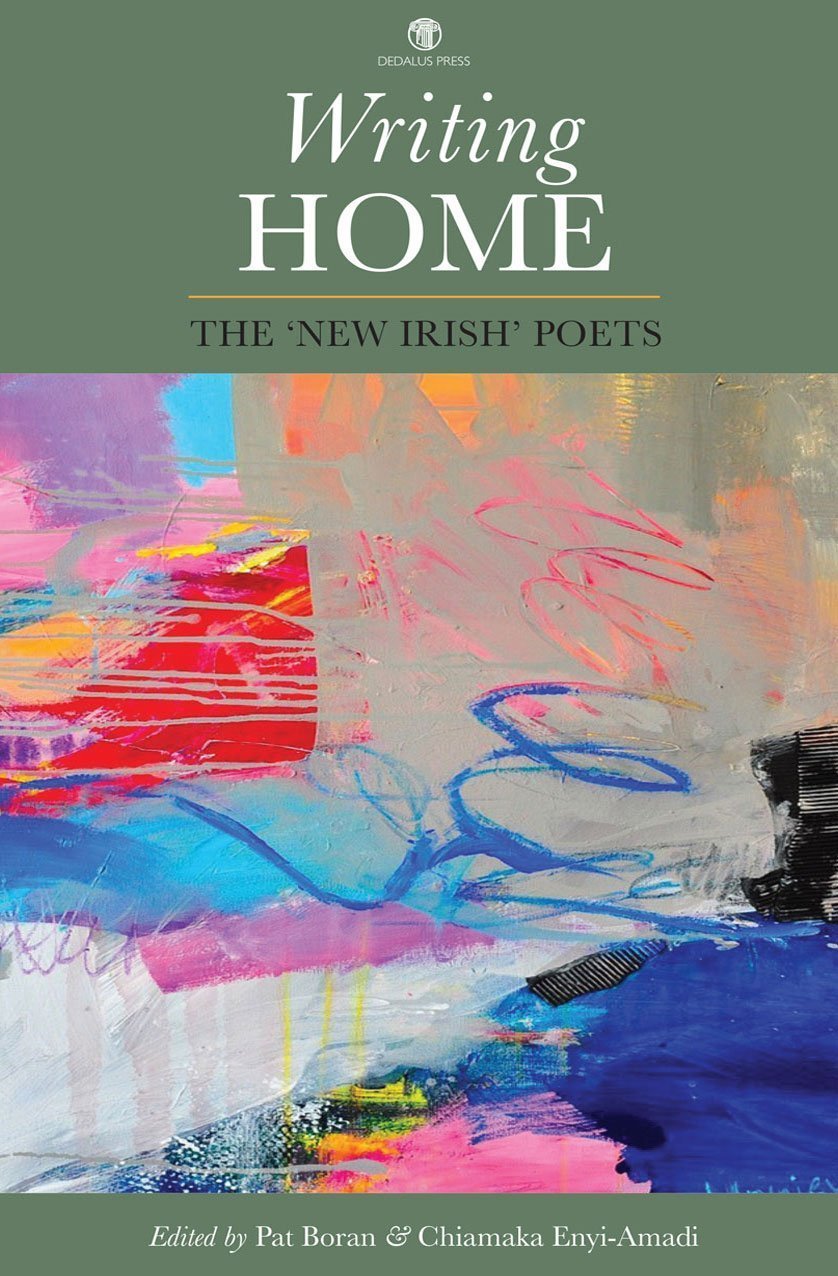 You have been involved in a number of really interesting projects, especially Letters with Wings. How did you come up with the idea for this? Can you tell me how you went about planning the events?

Letters with Wings is an initiative of NI-based poets: Nandi Jola, Maria McManus, Csilla Toldy and I. We co-founded it for Poetry Day Ireland. As we felt the pressure and mental strain of being locked down due to the pandemic, we discovered an emotional bond with those artists who are kept in prisons all over the world for speaking out and fighting for human rights.

When, due to the pandemic, the whole world had to suffer immobilisation, we felt that people would be more open and more sympathetic to the suffering of those who are imprisoned by dictatorships because of their belief, their activism, a desire to make a difference with their art, for speaking out.

So, on 30th April, Poetry Day Ireland we asked the public on Twitter and Facebook to engage with the stories of artists listed on our page, and write and post a poetic letter of solidarity. The day was immensely successful. These are our social media pages: www.facebook.com/WingsLetters/ and twitter.com/WingsLetters 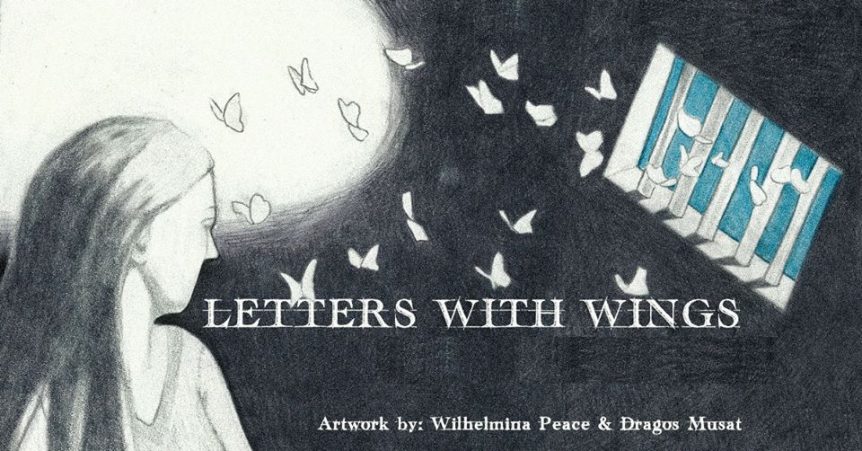 In your opinion, what’s been the biggest achievement of Letters with Wings?

Community involvement and the raising of awareness about human rights defenders and the importance of freedom of speech. We had 8189 people visiting/interacting with the pages, letters from all over the world were written to 27 artists who are imprisoned in China, Egypt, Eritrea, Iran, Kazakhstan, Mexico, Saudi Arabia, Syria, Turkey, Tunisia, Uganda. And now a total of 727 letters to be printed and sent. We are still seeking donations to realise this dream; this is the link to the donation page:uk.gofundme.com/f/letters-with-wings

On 26th June 2020, the day dedicated to Victims of Torture by then UN, we organised an online Poetry Reading and open mic event. Esteemed poets took part. Some were members of Freedom to Right campaign and others joined us from different countries in Europe as well as overseas. It was a truly international event, and some readers read in the original language, in Irish, English, Italian, Greek, Kurdish, Spanish, French, Polish. But also the public who attended the event was from all over the world: Belgium Belize, Brazil, Canada, France Germany, Greece, Ireland, Italy, Spain, Netherlands, Russia, Switzerland, United Kingdom, United States.

This huge involvement gave us a further sign of how collectively important is to defend our rights and freedom of speech. As the visual artist Zehra Doğan, who was in prison in Turkey for painting the destruction of the Kurdish city of Nusaybin by Turkish government and who also supported our initiative, said to us “art is the best fighting tool” and this is why governments fear artists and put them in prison. But art is also the best tool of resistance. It is joy as resistance.

Can you tell me about a highlight of Letters with Wings this year?

And can you give an example of an artist who was reached by your project?

The poet and editor Nedim Türfent. He is serving an eight-year-and-nine- month prison sentence on trumped-up terrorism charges following an unfair trial, during which scores of witnesses said they had been tortured into testifying against him.

One of our readers on the 26th June was in contact with Nedim Türfent’s sister and sent the video of our live Poetry Reading. She phoned later with Nedim and told him about it. He was very happy and sends us many kind regards.

Many poems of artists in prisons enlighten about those little things of our life, as a hug or the  blossoming of flowers, who became signs of humanity and freedom. It is the longing for the ordinary daily love, friendship, little human gestures that is so deeply missed by all of those imprisoned for their courage to say and write what they believe.

Here some are poignant, moving verses of the Iranian-British poet Nazanin Zaghari-Ratcliffe, sentenced to five years’ imprisonment in Iran allegedly for “plotting to topple the Iranian government”.

“I think of freedom, of return
Of that glorious moment of rolling into your arms
The arms I have longed for the past 500 days.

I think of my orchids and African violets
Have they bloomed without me?”

You say that similar events are planned for 15th November, International PEN Day and 10th December Human Rights Day, hopefully, by then as live events. Do you have any more information on this?

On the 9th September for Worldwide Reading for Democracy (International Literature Festival Berlin) we will join the Freedom to Write campaign and Irish PEN for a reading by poets and prose writers Celia de Fréine, Catherine Dunne, Viviana Fiorentino, Kate Ennals, Maria McManus, Lia Mills. The international literature festival berlin [ilb] is calling on individuals, schools, universities, cultural institutions and the media for a worldwide reading for freedom of expression and assembly. This is the link to the event: www.eventbrite.com/e/worldwide-reading-for-democracy-ilf-berlin-tickets-116207107587

And yes, we are planning further events, like those you mentioned, although we haven’t yet details, so, stay tuned! We will drop information on our FB and Twitter pages soon. Yes, hopefully as live events.”

In the information about Letters with wings, you say “We don’t wall in our imagination.” Can you say more about this?

Poetic letters want to witness a collective hope. Hope is like a delicate shoot raising from the ground, it needs love and determination to live. We firmly believe poetry is made of the same matter of hope: imagination, love, determination, sense of community, humanity. Hope is a breath. There is a verse of a woman Irish poet, still pretty unknown, Freda Laughton, that says ‘letters are winged now’, and we believe too our poetic letters are winged as well, wherever our addressees are, where we are.

I would like to share two poetic letters. One is the poetic letter sent by Catherine Dunne, who has chosen a poem by the Irish poet, Celia de Fréine, which deals with love, sisterhood, and the contemplation of loss. As Catherine said, it is dedicated to prisoners of conscience, everywhere.

At the market you bought a stack of clefs

and a pocket of seeds, I an armful of words.

As we crossed The Square a storm arose

but we held firm till the skies had cleared.

When we got home you planted your seeds,

filled your house with music. I crafted this book.

Open it and you’ll find words that celebrate

our journey rough and smooth.

Look out each morning and see a variety

of flowers, no matter how dark the night before.

The other one is by Rafael Mendes, a Brazilian poet who now live in Barcelona and used to live in Dublin. His poetic letter is sent to Dawit Isaak, a Swedish-Eritrean playwright, journalist and writer, who has been held in prison in Eritrea since 2001 without trial.

after the poem “waiting for the barbarians”

depluming birds, shooting in the eyes,