Home » #ArtsMatterNI, The Monthly » Paul Kane from OTH talks to The Monthly about the impact of Lockdown on his life and his work – Part 1

It was very difficult. I was furloughed from my job at the Oh Yeah Music Centre. I work part-time working on older people’s projects. That meant I was at home with no work to look forward to and also missing my colleagues.

I decided then to contact everyone in OTH Music Collective (formerly Over the Hill Music Collective – a collective which facilitates activities for its members who are by and large older musicians) and see how everyone was dong. We normally have a lot of work organising our monthly meetings, we do gigs in Care Homes, we are the house band for the Acoustic Picnic shows at the Oh Yeah Centre, and we work with musicians to produce albums. Our work is about mentoring, performance and collaboration.  I put out the email and got very few responses back. That was a little worrying because we had actually started work on the new album.

We decided to cancel going in to the studio which we were due to do on March 24th, a day after Lockdown began. So pretty much everything that I do was shutdown. Everything just stopped. 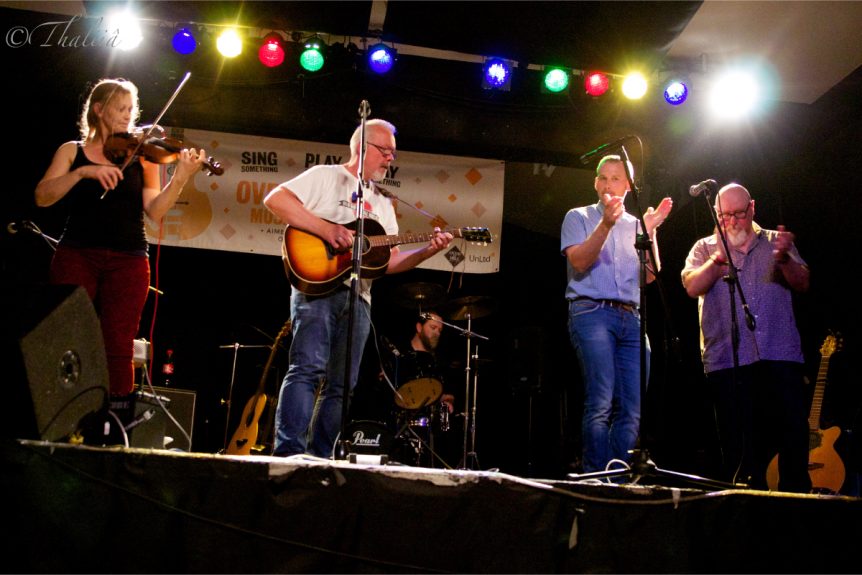 How did you respond to that situation?

I decided that I would simply start phoning people, old school if you like. We weren’t using Zoom or another of the online platforms, I just picked up the phone and started calling people. That generated lots of wonderful conversations, long conversations. People were talking to me about their situations, a lot of our members live alone and they were struggling with various issues, trying to come to terms with the Lockdown.

Zoom really didn’t work for us. It is very hard to do musical things using Zoom so we couldn’t really organise music sessions. And so we just talked with each other.

You didn’t move your work to a digital format?

A lot of the people who work with or who are members of OTH see social media as full of advertising. They see it as a method to sell stuff by and large. So it doesn’t appeal to them. There are other reasons, people don’t get much out of the relentless barrage of information much of which isn’t worth reading. There is also digital poverty, people didn’t have the finances to get access to the various platforms and for other people it just didn’t interest them.

You were talking to your members?

Yes. And through that we all got to know what we were experiencing, from being depressed, to using alcohol or overeating, or just feeling lonely. Some people were shielding, so they had underlying health issues. I live alone and I knew exactly how other people were feeling. Sometimes the conversations would go for an hour or an hour and a half and I got as much out of it as I hope the people I was talking to did.

I got together with Chip Bailey, (Chip Bailey is a musician who is the  drummer/percussionist/collaborator with Duke Special) and we came up with an idea for a song that represented being in lockdown. Chip had sung something into his phone with a rhythm. I suggested a Bo Diddly style riff to go along with it and the song was loosely titled “Wobble”,  its stared off being about the tremolo on the guitar but maybe that was the way we were all feeling at the time.

We asked OTH members to contribute lyrics and people sent all sort of interesting things to us so we decided to go into a studio and see if we could produce something that would let people know we were still around, we hadn’t gone away and OTH was still making things happen for older musicians.

The phone calls worked in a way that I hadn’t expected. The Lockdown perhaps gave us all a space to actually talk to people at length, not just quick phone calls because you are trying to find a space between other things, but real conversations that I think brought us all a little closer together. 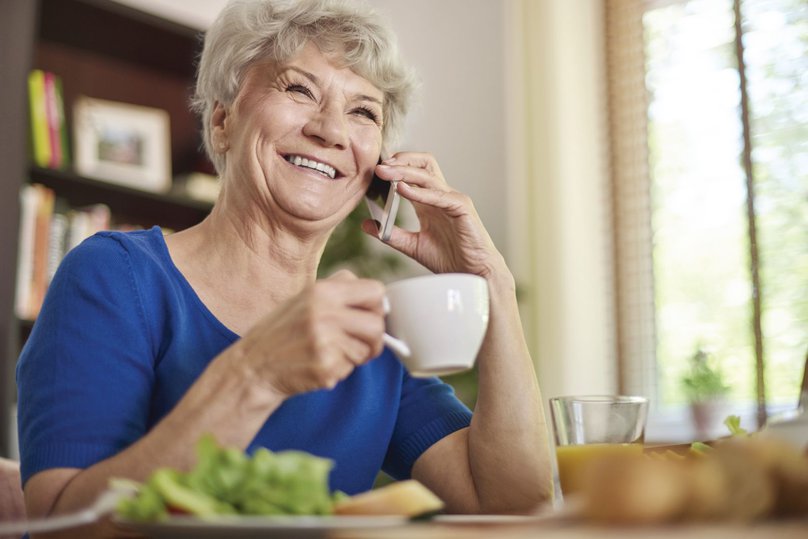 You do a lot of work at Care Homes particularly with people experiencing Dementia. That would have stopped completely?

Yes it did. We were asked to do gigs outside playing music through open windows and that really just didn’t work for us. I know other people tried that but for us there were all sorts of difficulties, it was hard for people to hear us, there was the question of keeping the cold air out of the nursing home, something that wasn’t talked about very much. Simple things like that which meant we really couldn’t do what we would normally do.

And of course there was the terrible situation in Care Homes with Covid 19 which not only shocked us but there was very little we could do regarding that situation. We did not want to add to that stressful situation and then suddenly all visits were stopped.

Was doing your work digitally an option for the Care Homes?

Not really. We did have discussions with people about doing remote gigs. Often having good Wi-Fi was a problem. There was a staffing issue, they would have required the staff to make sure that the online content could be delivered from their end. The Care Homes were not always in a position to have staff available to facilitate that. They are busy enough.  The most important element to me though was that trying to do an interactive gig with people experiencing Dementia, where the physical element of the performance is vital, where you are trying to encourage a response to the music, I just couldn’t see how that would work. So we didn’t see that as an option.

I am not saying that people shouldn’t do that and I am sure it would work in some settings, but for the people we were working with it didn’t seem to me as a viable option.

We are still trying to find a way which will allow us to do the work that we do in Care Home settings.

Maureen decided to not only pose as Dusty Springfield today, but also to sing one of her most famous songs!! #ALittleOfWhatYouFancy, managed by the GoldenThread Gallery, in partnership with the Oh Yeah Music Centre and #OverTheHillCollective, funded by the Arts Council of Northern Ireland #ArtMusicMemories

Posted by Over The Hill Music Collective on Tuesday, 24 April 2018

What else did you do?

We did look at the work we had done previously and tried to celebrate that. We had worked with Golden Thread Gallery in Belfast, the Care Home Work, the gigs that we did regularly, we did one project where we recreated famous album covers with older people in the place of the original artists. We did this with Lesley Cherry Visual Artist and Carrie Davenport Photographer.  We noticed someone else did the same thing recently and their efforts went viral, which suggests it was a really good idea. It was great to see others enjoying a project we had also done.

The biggest question for us is the question of doing live work. A series of questions emerge at this point. Firstly we have seen a lot of musicians transfer their work to a digital platform. If that works for them, brilliant.  Either live gigs where people buy tickets, or streaming their music through the various outlets.  Its difficult to monetise this and its just not the same as being at a live gig.  Others simply did not have the equipment to livestream gigs and this was challenging.  Don’t get me wrong I am sure there are some people who have gained much form this way of working, bigger audiences or working with international artists.  Yet we are musicians after all, they joy is playing together in front of an audience and getting feedback from your music.   I have wondered whether we will get back to playing live at any time in the near future.  For me there’s a real connection lost and I think we could all lose something special if live music/theatre/ arts is not assessable any more.   I don’t want to see the Arts undervalued or side stepped into having to do digital work all of the time.

Then there is the question with regards keeping being creative. I found that I really struggled in the early part of Lockdown, I found it really difficult to maintain my ability to create and that almost became a vicious cycle.

While we struggle to come to terms with all of the issues that arise whether just for us as musicians and then beyond that for the work that we do, we decided that the album was the key thing that we could be getting on with. 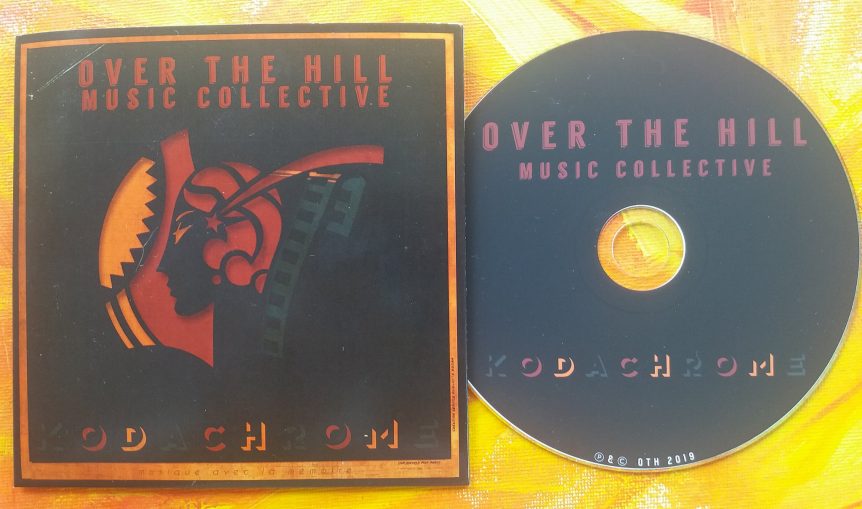