Home » Poetry and Spoken Word, The Monthly » The Monthly interviews Josh Schultz about the setting up of CAP’s Poetry in Motion Project

Could you explain how the Poetry in Motion project came about?

Poetry in Motion came about as one of five projects that made up the initial programme of the New Belfast Community Arts Initiative. Lizzie Devlin was its original Programme Co-ordinator for New Belfast. Lizzie is now an Arts Development Officer with Arts Council Northern Ireland.

With Poetry in Motion, there were two elements to the project as initially envisioned. The first was an integration of poetry writing with the school curriculum; this element was led by Joe Sheehy and brought both professional and/or community-based poets into schools across the city.

The second was a public element which I led that brought locally written poetry in to the public landscape. We did this by featuring poetry on billboards, buses and in performance. We also held masterclasses, supported local writers’ groups and published two books in that first year. The first was an anthology of collected poetry from schools; the second was “You Can’t Eat Flags for Breakfast”. This collection featured poetry from established poets, politicians and members of the general public, reflecting on their experiences and their hopes for the future. 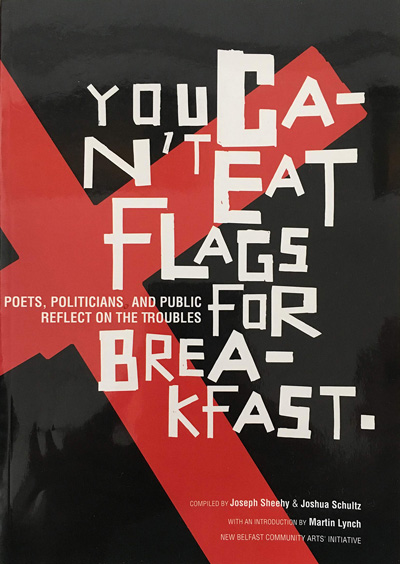 I remember there was discussion around the name “Poetry in Motion” and where it came from; I’m not sure it was ever pinned down exactly. Joe Sheehy would sing a few bars from the popular song in the office. Feedback that I received was that the name resonated with people due to its appearance of poetry on public transit; there was an appreciative recognition of similar schemes on the subways of NYC, the Tube in London and the DART in Dublin. It was a natural partnership with Translink and I think it made the journey on the bus a little more curious and pleasant. Along with the words from the local writers, Keith Connolly of Tonic Design made the work pop with his use of layout and fonts as a kind of an architectural landscape for the poetry to exist in.

What was the central idea behind the project?

The aim of Poetry in Motion was to encourage and facilitate a dialogue with members of the Greater Belfast public on their experiences over the last thirty years? Writing poetry is a great way to edit, shape and craft emotions and thoughts. As a form of self-expression, poetry encourages the writer to look at what is going on inside themselves in a more objective manner. It externalizes an internal process and a desire to communicate. The idea was to embed a healthy, rigorous process of self-expression in the city from an early age and schools were eager to participate. 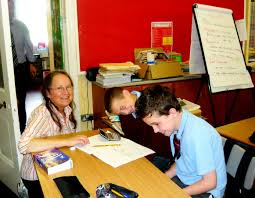 The idea around the exhibition of poetry was to inspire people to engage with local work as both authors and audience members. It was about building confidence, capacity and was meant to inspire people to participate in an exchange of views. We also supported local writers’ groups by engaging the great poets from the city to work with people at a local level to develop their craft. New Belfast was a peace and reconciliation project through the community arts and that’s what we were aiming to achieve through an individual, community and city-wide approach.

What was different about the PIM approach if compared to what was around at the time?

Just as today, there were many writers’ groups around the city. There was little sense of the sheer hum of activity that occurred across the city locally. This was just as the internet began to emerge as a thing in the public consciousness, if that’s even possible to imagine. The second collection of poetry, “The Lonely Poets’ Guide to Belfast” was an attempt to get a bird’s eye view of the activity taking place across the city; it included a list of resources and writers’ groups at the end of the collection. This in itself was impressive. At the time, there was The Creative Writers Network, which was an advocate for a joined-up approach on behalf of writers and we shared that sense. New Belfast was distinct from other activity in that its focus was on delivery rather than advocacy or research. It was a very optimistic period of time as we began to see the real possibility of moving past violence and sectarianism. We created partnerships with local festivals, business and libraries in the hope of bringing the work to as wide of an audience as possible. 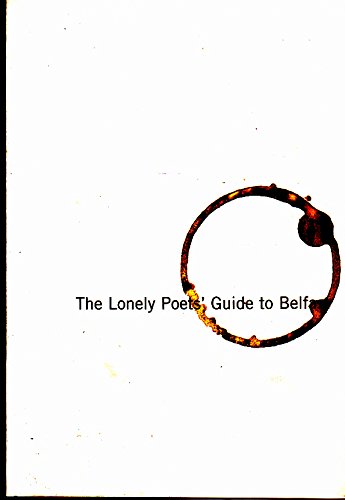 How was it funded?

The programme was originally secured from European Funding by two great visionaries who have individually contributed so much to the cultural fabric of Belfast: Martin Lynch and Pauline Hadaway, both working from the Community Arts Forum. The European Funding was part of the Peace 2 programme, back in 1999. DCAL, Belfast City Council and Lloyds TSB were early supporters; Esmée Fairbairn came on board in the following year.

How many schools and community groups were involved initially?

I think it was a characteristic of New Belfast, now Community Arts Partnership, to be ambitious. There were nearly 60 schools involved in the early annual programmes that Joe Sheehy was responsible for co-ordinating in one programme year. There were a further 12 community organisations and writers’ groups that we worked with in that first year through PIM.

How did PIM develop over the years?

My sense is that it has broadened its outreach by becoming even more professional and embedded over the years. Each Coordinator brought their own particular talent to Poetry in Motion and made the project all the more rich for it. After Joe Sheehy and me, there was Olivia Butler, Chelley McClear, Jan Carson and now Dr. Shelley Tracey. The project now delivers workshops in schools, community centres and writers’ groups across the whole of the North. It also offers two awards: The Seamus Heaney Award for New Writing and the Seamus Heaney Award for Achievement. That the Heaney Family officially supports the project says much for its ambition to engage individuals and communities to continue to express themselves through the written and spoken word.