Home » Poetry and Spoken Word, The Monthly » The Monthly talks to Maura Johnston, writer and poet.

What is your earliest memory regarding writing?

I can remember writing a little story, about 4 lines or so with some illustrations, for my mother when I was 4 years old, and she thought it was wonderful.

At primary school we were sort of limited to writing compositions, essays, and the teacher, Mr Ryan, seemed very concerned with good handwriting. He encouraged me now and again which was great. I had another teacher called Miss Woods who also encouraged me.

When I was a teenager I wrote a lot; I think most teenagers write a lot, I had a diary, and I wrote poetry.

Did you go on to write or study literature or anything like that?

I always kept up my writing and I went to University and studied English Literature. I met a man who I married nearly 53 years ago, and he wrote poetry and he encouraged me to write as well.

He was part of Phillip Hobsbaum’s Group at Queens University. My husband, Kevin, met Seamus Heaney when Seamus taught at the College of Education in Belfast, this was before he went to Queens, and he encouraged Kevin to go to that group. Kevin didn’t stay very long in that poetry group but he has since written three history books.

What are the underlying themes which emerge in your writing?

I think that I write about relationships, about home, anything which interests me, and I don’t tend to write about world events or political things directly.

Your poem “It was the longest….” was quite political?

Yes, I had forgotten all about that. That was a poem for a cross border project and I was using a metaphor of gardeners showing responsibility for shared ground, and realising they are caretakers for future generations. I think it was useful in terms of the point I wanted to make but I don’t often write politically or about politics directly.

Are you writing anything at the moment?

I have found that the Pandemic impacted me quite a lot and I felt I was struck with a terrible lethargy. But I did manage to produce a book and that was put out at Christmas. That book was a glossary of the kind of language Seamus Heaney uses in his poetry and his plays. I am also writing a series of memoirs for my grandchildren and I am helping Kevin research the last chapter of a book he is working on.

Yes perhaps but initially I found it very difficult, but I have written quite extensively more recently. I do find that I tend to write quite slowly and in the last twenty years I have written two collections, so I am hoping that this next collection comes together more quickly than the work I have produced in the past. 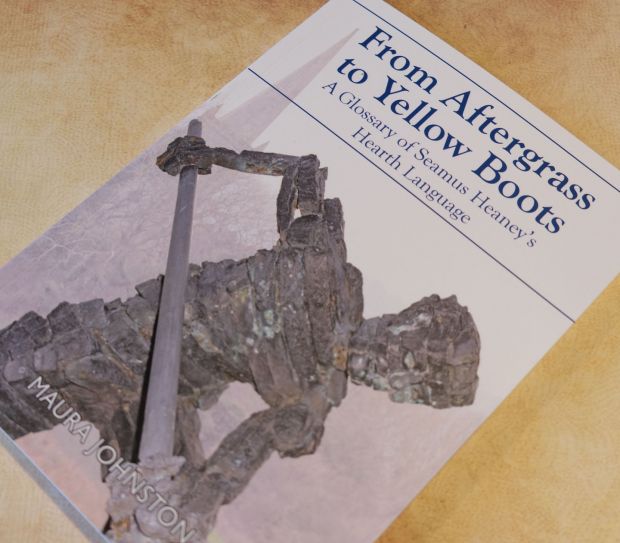