Los Angeles Poverty Department was founded in 1985 by director-performer-activist John Malpede. LAPD was the first performance group in the nation made up principally of homeless people, and the first arts program of any kind for homeless people in Los Angeles.

Skid Row Los Angeles is the poorest area in the city, with the largest concentration of homeless people of any neighborhood in the US. LAPD, as the first arts organization on Skid Row, immediately became active in a conversation and a movement with advocates, residents and social service professionals, that put forward the idea that Skid Row could be improved, by embracing and nourishing the powers of the people who live there.

In 1976, ten years before the founding of LAPD, community advocates from The Catholic Worker, The Legal Aid Foundation of Los Angeles and The Community Design Center and residents had successfully defeated an “urban renewal” plan that would have up-scaled the entire neighborhood and displaced all its residents. Community advocates organized and presented an alternative plan.

Their plan proposed saving the single room occupancy hotels and committing resources to renovating and augmenting this housing and locating social services in the area. They argued that renovating the existing housing was more cost effective than building new housing, which would likely not get built— because of the price tag. And they argued that if the Skid Row housing was bull-dozed, new housing for people displaced from Skid Row would not get built, because of other neighborhoods’ opposition to housing “Skid Row people.” The L.A. City Council adopted the advocates “Blue Book Plan” plan in 1976.

In the years since, more than 40 former flop-house hotels have been transformed and another 20 built by non-profits to provide safe, affordable, permanent housing. This housing stock has been preserved in large part by the organized civic engagement of Skid Row residents, who have testified at City Hall, protested in the streets and sued the city in court, to successfully resist constant development and displacement pressures. Nevertheless, housing creation has not kept pace with need, within Skid Row, or elsewhere. The result: today 8,000 of the 14,500 neighborhood residents have permanent housing, with 3,000 people in transitional programs and 3,500 residents currently living unhoused on the streets. With few exceptions, the housed, permanent residents are formerly homeless people, they include children, elderly, women, families, veterans, a large and active drug recovery community, those with mental and physical disabilities, and people recovering from incarceration.

LAPD believes in the power of imagination to motivate people -and not only artistically by acknowledging the hopes, dreams, rational and spiritual power at the core of everyone’s humanity. LAPD’s success has encouraged many Skid Row agencies to integrate arts into their programs and has informed policy. LAPD is a pipsqueak organization that has had a major impact on raising the value placed on the arts by social service providers and policy makers. 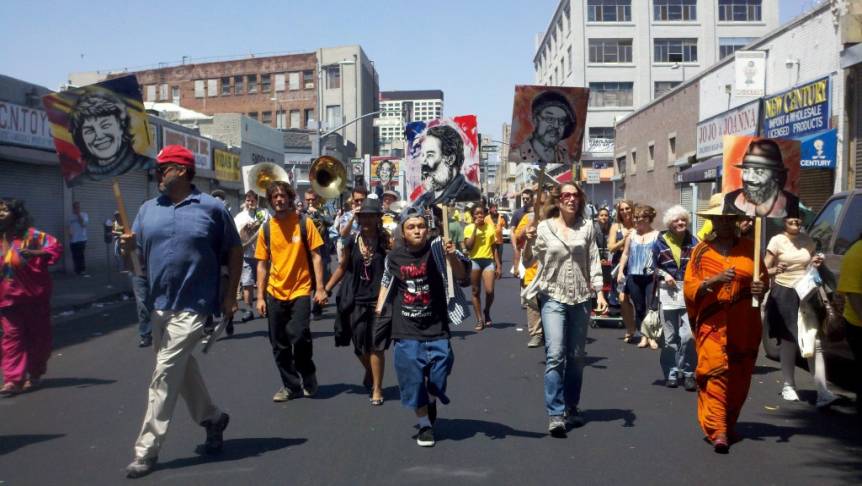 LAPD’s activities and projects have used theater and other arts to thematically focus on a constellation of inter-related issues of continuing importance to Skid Row, and other low-income communities. A common element is to create acknowledgement for the accomplishments of the neighborhood. In articulating the new reality of the neighborhood, we create a narrative that causes re-thinking of a variety of issues, including gentrification and community displacement, drug recovery, the war on drugs and drug policy reform, the status of women and children on Skid Row and mass incarceration and the criminalization of poverty.

Based on our continuous, committed work on Skid Row, LAPD has been invited to create residency projects in communities throughout the US, and in the UK, France, The Netherlands, Belgium and Bolivia, working with drug recovery programs, shelters, policy advocates and arts organizations. We’ve won a number of awards including LA Weekly Theater Award; New York’s Bessie Creation Award; the San Francisco Art Institute’s Kent Award; Theater L.A.’s Ovation Award; Cornerstone Theater’s Bridge Award; and an Otto Award for political theater as well as LA Weekly’s recognition of LAPD as Best Creators of Politically Art Shows.

The process used is to create a normative community on Skid Row and normative communities for all people living in poverty. In other words, if they’ve got municipal services in some parts of town, then thsoe services should be in this community as well. If they’ve got parks, restaurants, community centers, then Skid Row should have the same. There should be the same policing in this community as in others. Not, bending of the laws to serve racial profiling or to affect any other aim such as harassing people so that they will leave the neighborhood so that it can be developed.

LAPD makes change by creating initiatives that bring together Skid Row community members, grass roots organizations and service providers. With the Urban Institute and Americans for the Arts, there was initiated a series of neighborhood convenings for residents and community organizations to articulate the role of culture in Skid Row and to find out what they desire for the future. The results were published by Americans for the Arts in a paper co-authored by Maria Jackson of the Urban Institute and John Malpede of LAPD. The paper affirmed the importance of grass roots culture arising from the initiatives of Skid Row residents. It has been a hugely well-received and is often cited source of validation among Skid Row cultural activists. As OG Man, whose initiatives include art workshops and starting the Skid Row 3 on 3 basketball league told Malpede, while brandishing a copy of the report, “Now, finally we got proof of what we knew along but no one listened to.”

In October 2010 there was the first annual Festival for All Skid Row Artists. The annual festival now presents performances and visual artwork of 125 artists per year and is attended by upwards of 1,000 people. Each year the artists are interviewed and the work is documented and this archive now includes the work of over 900 Skid Row artists. In 2012, initiated our “Walk the Talk” project: a peripatetic performance with 36 scenes. Each scene in “Walk the Talk” was performed at the site associated with the efforts of 36 neighborhood social and cultural visionaries.

This project has become a biennial parade-performance event complete with artist commissioned portraits of each honoree and a New Orleans style brass band leading the parade.  Honorees are determined by a community nomination process and extensive interviews with them are archived along with the scenes about them performed by LAPD. In 2020 we launched a dedicated website for Walk the Talk, making all the interviews, scenes and portraits available online.

In April 2015, LAPD opened its Skid Row History Museum & Archive. The museum functions as a means for exploring the mechanics of displacement in an age of immense income inequality, by mining a neighborhood’s activist history and amplifying effective community resistance strategies. It also serves as a literal and artistic common ground, a welcoming space for Angelenos to meet and mingle and explore civic issues together.

LAPD values accessibility and inclusion. LAPD meets people where they are. Society judges, gives labels rather than giving the space for recovery. LAPD doesn’t do that. Not judging, the organisation builds compassion.

See more information at the link below.