The Champion Things musical output is impressive; four full albums in two years, if not a little intimidating in its dedication! The band members would probably eschew the label of having made a ‘Covid album’ in “Deep Within the Slum Kitchen”. Isn’t all music (and Art) hence, post-Covid art, or at least, post-the scar of having lives interrupted by an immutable and invisible force. 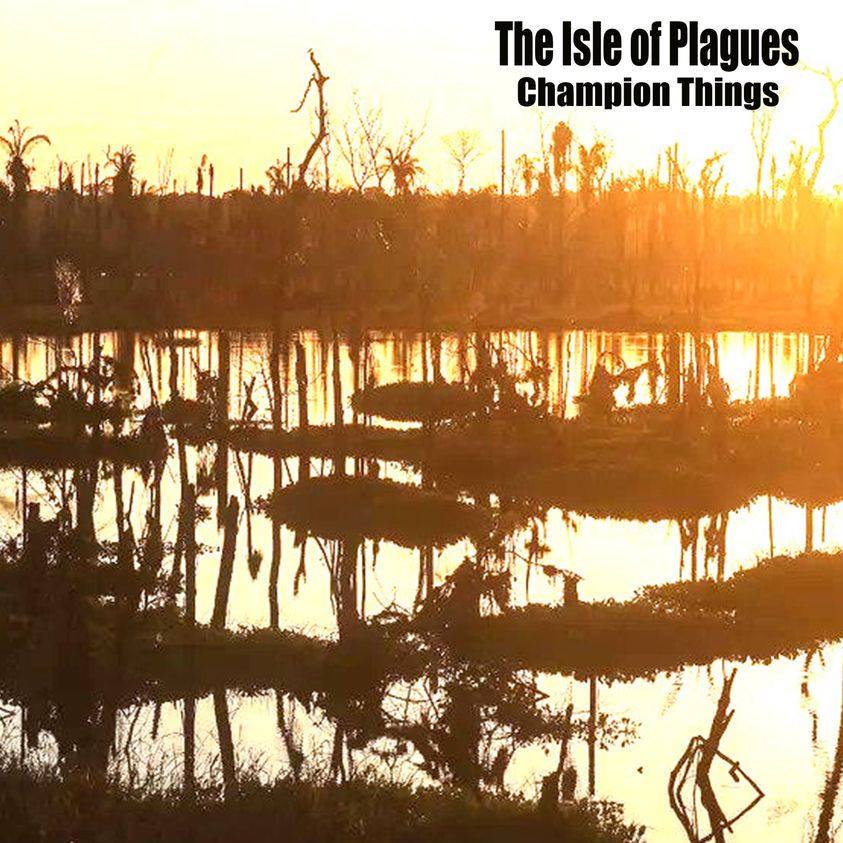 Furthermore, you could call this a peri-pandemic album, since it looks at the seeds of the destruction, from a global inspection of the issues. Moreover, how humanity chooses to handle those issues, for themselves and those around them.

The sound of the nine tracks contained within, is international too, even ‘universal.’ Spoken Word with its emphasis on the lyric, as opposed to the music, easily ascends from any regional territory, and can wind up in some pretty interesting locations, (as hitherto reactions to Deep Within the Slum Kitchen can attest.)

There are still some firm acknowledgments of instrumentation and skilful playing on the album. It is “announced” by a 50-second track ‘Welcome,’ and is nicely bookended with marginally longer track, ‘Farewell.’ These beginning and ending tracks announce and settle the narrative. 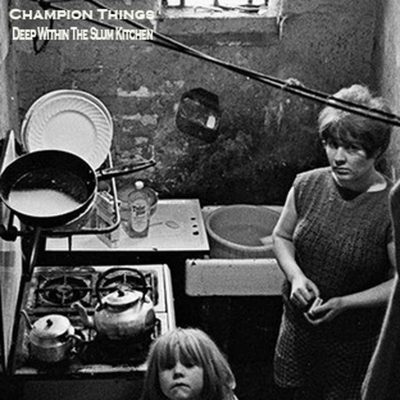 On ‘Welcome,’ Ghanaian Master Drummer, Thomas Annang, shows off techniques of dissemination between bass, slap and tone strokes on the hand drums. I imagine a link with the cradle (of Africa), the beginning of life, but also beginning of death as was demonstrated by some of the themes in the last Champion Things album, “The Isle of Plagues”. 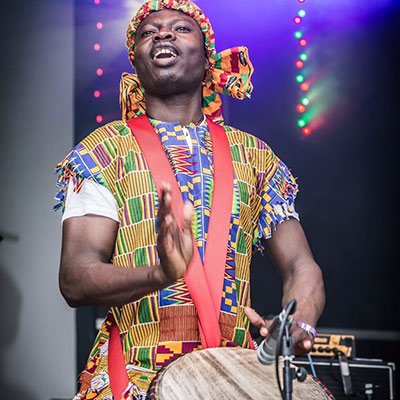 The intervening discourse, effectively six substantial tracks, forms a content drawn from the band members firing up a crucible of contemporary research, painstakingly undertaken by diligent study, writing and practising. Although expounding ideas, causes and effects takes place within each vocal track, the listener is invited, rather than coerced, into making their individual stand, if at all.

With this album, there is a greater degree of deployment of sound production effects, leading at times to almost ‘yawning’ synapses between stanzas. Perhaps a moment to inhale the import of that which is being presented to us. The overall sound is a more honed and confident style than earlier Champion Things albums namely ‘Decline of the Adventure Playground’ and ‘Heading Down to Hoovertown.’

If those are beginnings and endings, the main tale is that which yields to the album its title, ‘Slum Kitchen (Part1)’ and ‘Slum Kitchen (Part 2)’ are the main fayre, pun intended. Where on-trend street food is prepared in a place where a mother and her young children bathe, sleep and work, with inadequate drainage, cramped conditions, and little differentiation between night and day.

Medical science in the form of Covid testing seems incongruous in an environment where the luxury of isolation is practically impossible. To overcome the futility and harshness it takes to keep ‘swinging’ is ‘living’, but it is better than the alternative, a cardboard city. Part 1 incorporates a fragile heart (drum) beat. 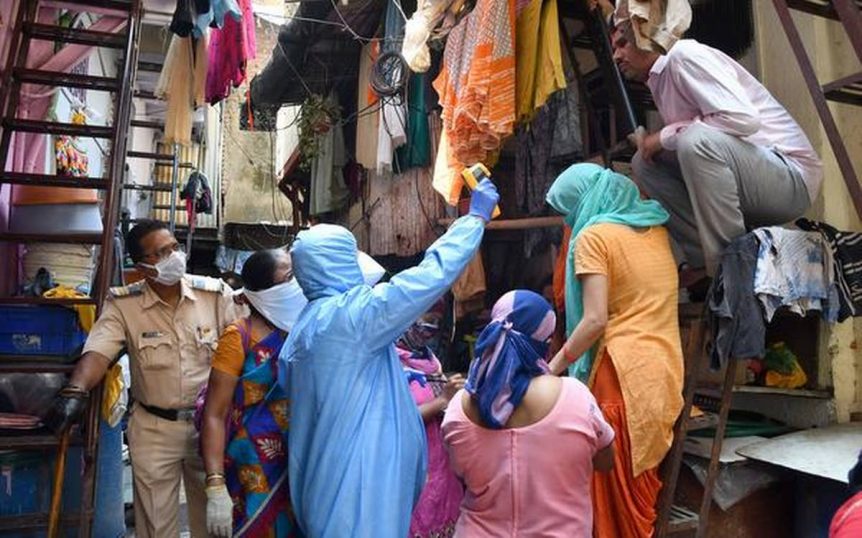 The album cover graphically illustrates that conditions like these were common up to five decades ago in Britain. Maybe they still are. Poverty is a fluid concept; depending on the comparison you use.
The Indian subcontinent forms the base for the next track, ‘12 in the bed’ a story of a swami and how the ‘super spiritual’ can exploit any given crisis.

Hewitt is showing himself through these ‘anecdotals’ to be a developing and powerful raconteur. He is perfecting the right amount of detail for picture painting, to fully understand the tale and the context, without being patronising. The way the traditional news is presented, in hourly abbreviated garbles is hardly helpful in really understanding a set of circumstances in another culture.

The direction that Champion Things pilot, begs the question, what do we listen to music for? What do we want from our listening experience? Is it to plump and pad our emotions? Foster dreams and ambitions? Reinforce a social or tribal identity?

One of the foundational uses of music in early life, is to help regulate mood, an attempt to cope with overwhelming feelings. If this album is asking us to inhabit the feelings of another, where do we go then? The Photographer for me is the overall metaphor for intransigence and its opposite, having principles over profit, even though it costs in the short term.

Champion Things, particularly when embracing Spoken Word, foster a sense of worldwide connectedness. They did this even when the world was at a standstill and we were all told to stay at home.

This album is not without its challenges and music that is challenging is, seemingly, not as popular as that which is an emotional prop. And therein lies the rub. Everybody knows Bob Marley stated people were hated for being real and everybody loves a phoney. It’s the exploitative instinct that negates the rights of another that will lead to an injustice every time: the “3 repeating” of human history.

While Champion Things don’t deal with love directly, it is an idea which permeates the writing and might be summed up by CS. Lewis’ view of love; that it is, “choosing for another’s highest good.”

There are a lot of “fluffy” songs about “love”, (there are no “fluffy” songs on this album) and none of them probably equate to something you do, rather than what you get. But imagine the non-partisan

revolutionary potential involved of even one choice for another, per day. That might create a ‘climate of change’ where change needs to occur before our hearts stop “swinging.”

Champion Things (on this album) are:

Deep Within the Slum Kitchen is available now to purchase on bandcamp by following this link – championthings.bandcamp.com/album/deep-within-the-slum-kitchen