How did the initial Lockdown impact Beat Carnival?

The first reaction to the pandemic happened just before St Patrick’s Day last year. We had been working for months creating new constructions, new floats, new performance. We had been working with community groups and performers and visitors had arranged to travel from England for the event. The last-minute cancellation was a huge blow.

We could tell then that things were going to change dramatically and that we were going to be affected in terms of our work and especially our income. The events and activities which are the mainstay of our income were simply not going to be happening and at that point we didn’t know for how long.

By the end of March we had to close our building and then look at how we might be able to work from home. And of course that meant we were not going to be able to carry on working with artists. We didn’t furlough any staff: after the initial closure and assessment of new procedures and arrangements, we kept our staff working including our contract cleaners and people like that.

There has been a huge blow to our income and one of the other things which has been very difficult has been maintaining relationships with participants.

We moved, like everyone else, to working online, but that really doesn’t work for everyone, and some of the people we work with didn’t have access to the kind of equipment or expertise that was needed. As an alternative, to keep programmes running we produced DVDs that were then distributed within the community.

In general it wasn’t the most satisfactory process and so when Lockdown ended the first time we were glad to open up again with policies and procedures to make sure people were safe. For example, we might only have two artists at a time working in the building. We have a large, open workspace in the building so we were able to make individual working spaces for artists and weekly programme participants, keeping their own work materials in personal bags from session to session.

We weren’t able to produce outdoor events as soon as we initially thought and that situation went on until September when we created a music and dance performance in a park. We had hoped that we would be able to progress with outdoor events through Halloween and then Christmas, but everything tightened up again. 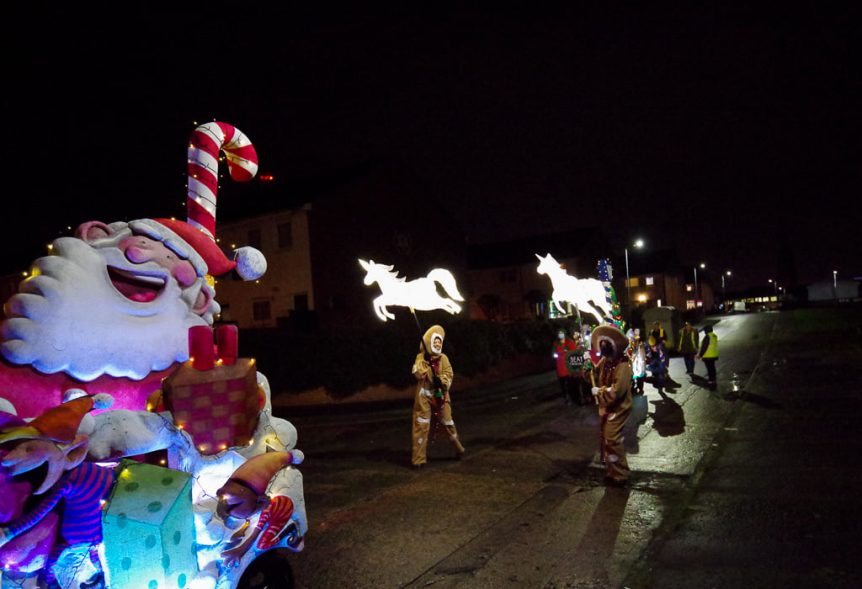 We did organise two, small-scale, neighbourhood parades in the Christmas festive season. We originally planned a continuation of work with people in Lower Shankill and Lower Oldpark, that they would be part of a performance in their own streets: however we were restricted to having only sixteen people together, so a small group of our performers with specially created floats took mini parades through the areas, passing houses that otherwise never experience anything like this. Residents had lanterns and other decorations prepared in workshops prior to the events and people decorated and lit the front of their houses for the parade coming past. These mobile, street performances were very well received.

Having mini parades in local areas sounds like a great idea?

In the areas we went to, it is often the case that very little or no arts provisions gets into those areas and not onto the streets. So people were really enthusiastic – residents were particularly delighted for their children having the experience in such a difficult time. We plan to do a lot more of that kind of work: small-scale, neighbourhood performance, with people where they are. We may not be able to do big city centre events for a while, but those type of events where we produce mini parades with local areas, especially where there is very limited arts provision, will be part of our programme going forward. 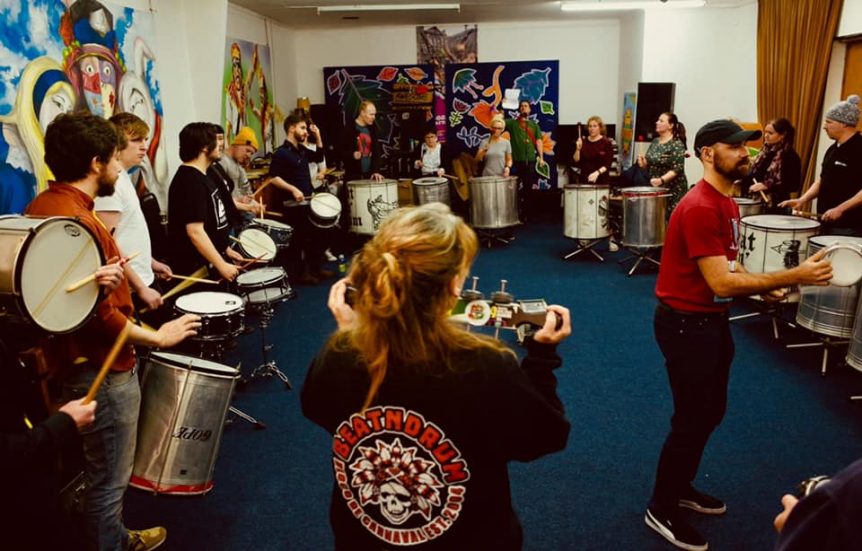 These areas would be considered areas of deprivation. Would those be the kind of areas Beat Carnival would work in?

Very much so. I think the idea that we were ‘all in it together’ didn’t really feel like that. People were telling us that they were not getting much support in these ‘fringe’ areas and indeed – are always left out. It is often not easy in neighbourhood areas to access funding opportunities because of how organisations need to be set up to do that. Because of that, people felt that they were not being considered and so when we came in, it certainly felt like it mattered.

How did you feel the funding bodies handled the Pandemic?

There were good things and bad things around funding. We were not eligible for the emergency support that was first disbursed with criteria such as having to be at imminent threat of closure. The Arts Council eventually had emergency funding and it was vital that organisations had that kind of support but the criteria around funding, and the conditions and interpretations around profit / loss / deficit didn’t make it easy to understand, never mind to apply for. We were careful with regards the resources we had.

Project funding bodies were very flexible and allowed us to look at what we could deliver over amended timescales. Children in Need were very good in allowing us to postpone for a year and return to activity when it would be possible to do so.

We are all aware of huge emergency funds going to certain places and you do wonder how this happens, but we have maintained ourselves by prudent business practise… we are used to ‘cutting our cloth’ to low and diminished levels of resources – and we hope to be able to do so for some time to come yet. 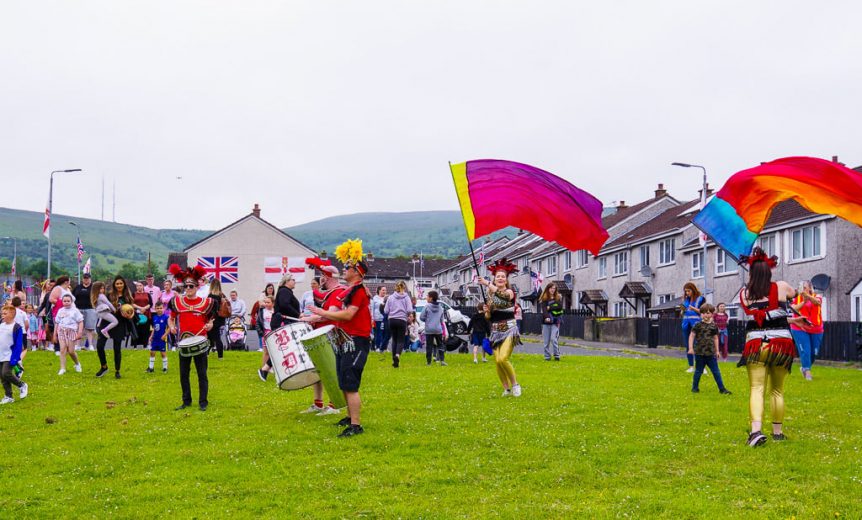 One of the things we did during Lockdown was provide new types of artist training and we have already seen that new skills in communication and media have been valuable and will be used more in future. Maintaining community through available communications as well as having artists developing work in the Carnival Centre is quite important because it would have been very easy to lose the specific skills which are needed to produce the kind of high-quality events that we produce.

We have been able to maintain international collaboration, through online tech, and in some ways that is much easier now. We do miss face to face connection, we should have had international partners here in the past year as well as us working elsewhere in Europe. These relationships far outside of Northern Ireland will continue as an important priority, but for many reasons, the nature of this work has probably changed for good and will be practised in different ways even after pandemic restriction have lifted.

One of the big issues from the past year and a half is people’s mental health. We have been supporting people not just with creative arts provision but with a more all-round and personal support. This is something we will keep in our working practice, into the future.
I think we might end up working in a much slower way because we simply don’t have the resources we had before the Pandemic to do the, all singing, all dancing, street parades that we have created for the best part of three decades. Everything hit us at the same time: cuts to core funding, loss of commercial income and not being able to develop new business opportunities when everything was shut down. ‘Where to now?’ is indeed the question we are addressing.

Are you moving into the new future with confidence?

In some ways I think we are. We were going to use 2020 as a year of reflection even before the Pandemic emerged and so we will be working in a different way, anyway. There is no escape from the reality that costs are rising drastically while our arts funding is reducing drastically. We always have to look at what we are doing as an organisation. We don’t want to be doing exactly the same thing all the time, year-in year-out, so we will be looking at our methodology and our understanding of ‘quality’; increasing

educational activities, training and development and the localised and ‘fringe’ work I talked about earlier. I want to make headway in archiving the work we have done over the years so future generations can build on it and use the tools we have successfully developed. So, generally we are looking positively into the future.