You have invented a new form of short form poetry?

Yes, I have and it is called nonaku. I invented this short poetry form in September 2020, only three months after I first took up poetry writing.

I started writing haiku in July 2020, looking to challenge myself, and before long I was introduced to cherita, a form of 6 lines where the words follow the pattern of one line, two lines, then three lines (in any order) without word or syllable count. I really enjoyed writing cherita and in fact, my first published poem was a cherita in the cherita journal (October 2020) edited by the inventor of the form, ai li.

Then a friend of mine, Patricia Prime (co-editor of the Kokako journal) introduced me to hay(na)ku which is a yet another structure within short form poetry invented by Eileen Tabios in 2003. This form has a word count structure, one word, two words and then three words, again, in any order. I was working away on all these different forms and structures and I slowly pieced them together to make a new form.

What are the rules for this new form?

The order of the two sections can also be inverted, where the 2-line attachment goes before the main section. I think a nonaku is like a mini haibun, except with word count. As a poetry form, it works well for storytelling.

I wrote some 100 nonaku before announcing it, because I wanted to make sure that it was a workable and robust form.

vivid dreams
of a golden age

You have also established Chalk on the Walk (Haiku) and (Monoku) quite recently?

In July 2021 my 7-year-old daughter Zoe and I attended haiku poetry workshops by Sandra Simpson and Margaret Beverland in Tauranga, NZ which is about three hours drive south of Auckland, and on the way back we visited the Haiku walkway in Katikati. It was a windy day and despite the light drizzle, Zoe and I had a great time at the park admiring the haiku engraved on rocks all around, and at the time we thought it would be amazing to have something like that in Auckland.

At the end of August 2021, Zoe and I saw some photos online where the American poet, Wilda Morris, had hired a little boy to chalk poetry on the sidewalk near their house, and we thought we could easily do that ourselves during the long Auckland lockdown, and that was when the Chalk on the Walk Haiku initiative was born. 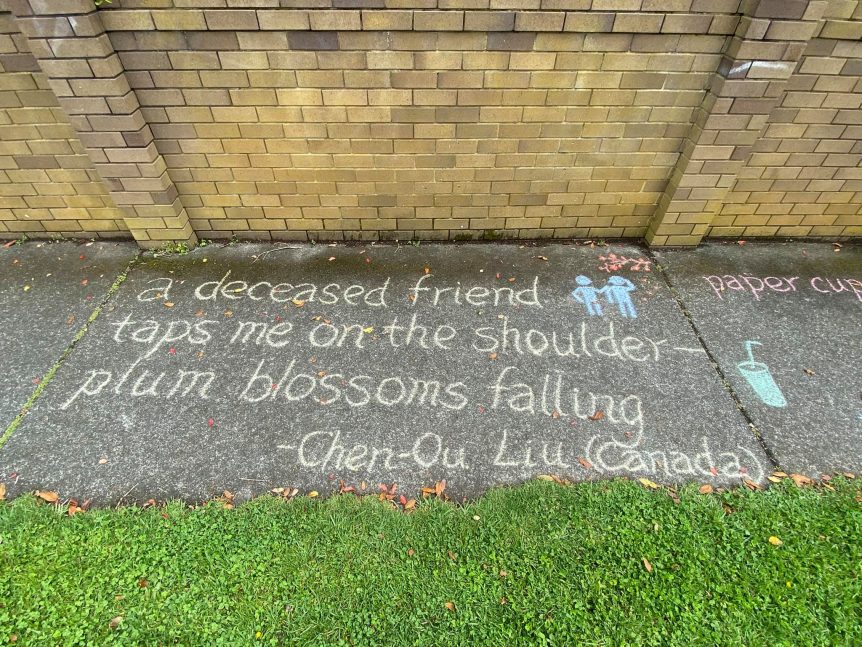 Zoe and I started sharing published poems written by haijin friends from around the world. We’d chalk one poem each day on the sidewalk just outside our house. This later grew into two poems each day because we set up another sister Facebook group “Chalk on the Walk Monoku” for sharing one-line haiku.

Our chalked poems are photographed and put online. On rainy days we share haiga instead. When we run out of poems to share, we’d share our own, or quickly collaborate and make a new one for sharing.

This initiative has been very successful?

The two sisters select the submissions and I am in charge of the chalking and the girls help with the illustrations when they can.

dying to
change the world
lightnings