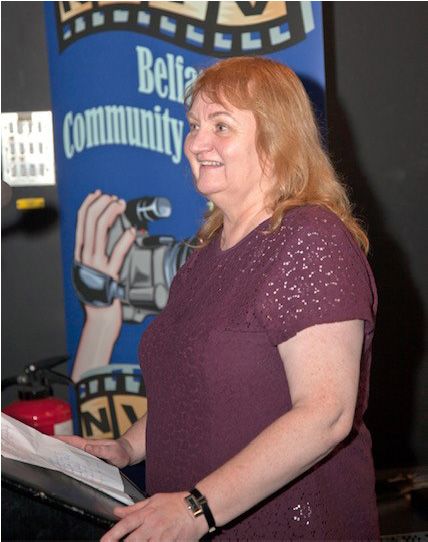 The Arts Council of Northern Ireland has learned with great sadness of the unexpected death of Marilyn Hyndman, founding member and Programme Producer of Northern Visions, who has died, aged 68, in hospital in Belfast, on Saturday 22nd January.

Marilyn Hyndman was a lifelong campaigner for social justice, from her time in Just Books to being part of the Belfast Women’s Collective in the 1980s. She was a filmmaker of distinction with programmes broadcast on Channel 4 and elsewhere. As early as 1971 she and her husband, Dave Hyndman, with a group of like-minded artists, set up the Belfast Arts Lab, which was heavily involved in cross-community work as well as printing for civil rights groups, community groups, and political groups. Her book, ‘Further Afield: Journeys from a Protestant Past’ (Beyond the Pale Publications, 1996), a collection of 40 accounts of what life is like for working class Protestants who do not fit the traditional mould, made a significant contribution to political debate in Northern Ireland.

Her strongest legacy she leaves to the arts and the communities of Northern Ireland came with the creation in 1986 of Northern Visions, which she co-founded with Dave Hyndman and others, who was a former Board member of the Arts Council of Northern Ireland. In their own words, Northern Visions represented a “vision of a democratised form of media, where new technologies are utilised as a tool for expression and creativity, to effect social change and combat poverty, social exclusion and isolation”. They launched Northern Visions Television (NVTV), a non-profit local community television station based in Belfast, in February 2004, and the station continues to stream its programming online. The station’s facilities are used by 200 community-based organisations as well as artists and filmmakers. With Northern Visions (NVTV), Marilyn produced more than thirty documentaries and short films, and she was deeply involved in programme making for the station up to the very end, including the pioneering of a training programme to ensure that the next generation of producers would be able to make their own work, especially those whose life opportunities wouldn’t ordinarily have afforded them the chance.

“Marilyn was one of the kindest, most intelligent and gentlest of souls. She was a passionate champion of the role that arts and culture play in reaching out across communities and within all our lives. She was a lifelong friend to many, as well as a loving companion to Dave and an inspirational mother to her children, Sinead and Conor. She enriched the lives of all of us who knew her, radiating a gentle warmth that encouraged us to stretch ourselves that little bit more. Her legacy will live on though the work of Northern Visions and in the hearts of many who are now grieving her loss. Our thoughts and prayers are with Dave, Sinead and Conor.”

“I’m still in shock and disbelief that Marilyn has left us. She was a committed, dedicated champion of lesser-heard voices throughout her career. She did so much for community arts, serving on the board of New Belfast Community Arts in its infancy over 20 years ago and adding her considerable knowledge, experience and imagination to a range of campaigns like “Let’s Get it Right” and ArtsMatterNI. Her drive and determination were legendary, securing the redevelopment of the building where her organisation resides; engaging with community broadcasting initiatives across these islands and programming NVTV, our community station. On a personal level, she was generous, thoughtful and honest. It’s not that long ago that I was chatting with her, just catching up on how our lives were going amidst the chaos of covid. My heart goes out to Dave, her husband and their son and daughter Conor and Sinead at this sad time.”