What is, or was, “Wild Women of a Certain Age?

In the late 90’s – when I was in my mid to late 40’s – I was entering the peri-menopausal stage in my life. The perceived wisdom back then was that your life would slow down. But I was feeling hugely creative. I was teaching full-time in a Special Educational Unit for teens, I had three children, and I was still writing a lot of poetry. The poetry collection, “Wild Women of a Certain Age” sprang from that busy life, that creative surge, that intense engagement with living.

I don’t ever write a collection as a preconceived idea. The poems come as they want to. I’d been reading a fair amount about the history of Celtic women, and soon I found myself looking at various stories and legends from a contemporary woman’s point of view. I had great fun, for example, transposing Queen Maeve to the late twentieth, early twenty-first century and seeing how she fared. I played too with two of the most famous Scottish Border Ballads. In the original, when Tam Lin goes off with another woman – in the ballad she’s the Faery Queen – his fiancée has to go through a series of tortures to win him back. Tam is portrayed as a poor innocent who’s fallen victim to the more powerful woman. In my rendering of the story the Faery Queen confronts Tam Lin, pointing out he always had autonomy in what he was doing, exposing him for being wilfully adulterous.

These poems and many others, set fully in the modern day, are often very playful, but they make strong feminist points. Many of the poems do spring from real life, like Fruit Machine, where a woman is trying to have a drink alone in a bar. The title poem comes from when I was on holiday in Ireland, in Galway, a young man said that me and my friend were ‘wild women’. Quick as a flash I replied ‘of a certain age’. And that was that! All I had to do was sober up, write the poem, and the collection. 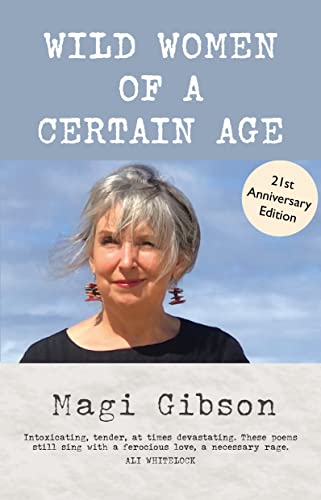 And that has been very successful?

Yes. It sold out its first two print runs very quickly, and soon became my publisher, Chapman’s best-selling poetry collection. It’s just been published in a 21st anniversary edition too by my current publisher, Luath Press. It strikes a chord with women, I think, because it’s about women taking control of their own bodies, their sexuality, their choices. About taking control of their own lives. Being unapologetic about it, and funny and empowered.

For the new edition I had to write a new introduction and there are a lot of poems where I’m driving. I don’t think those got there by chance. It’s taken a long time for women to be in the driving seat of their own lives. And it’s not all upbeat, it would be a mistake to think that. The lives of women contain many challenges. I address issues of the day through looking at situations for women in the past. For example, women in Scotland in the 17th and 18th century who had a stillbirth would be executed if they didn’t have a good explanation as to why the pregnancy failed. And in some countries, for example in certain parts of South America, that still happens.

And from there you develop the “Wild Women Writing Workshops” from the book?

I was asked about a year after the book came out to facilitate workshops at a writers’ conference. I suggested doing a Wild Women Writing Workshop, and that started the whole thing off.

There is plenty of evidence that women talk less when they are part of a mixed group, so Wild Women Writing Workshops, apart from encouraging and stimulating women to write also aims to address the question of encouraging women to express themselves.

A wide range of women of all ages have attended the workshops over the years. From women who have already published and are looking for stimulation, to women who are simply looking for an avenue to express themselves, an artistic outlet. The workshops enable women to address issues particularly connected with their experiences. For example, the question of having children, giving birth, or deciding not to have children, or perhaps not being able to have children, these are highly emotive and deeply personal elements in a woman’s life.

The workshops provide a space where all of this, and many other topics affecting women, can be spoken about sensitively and honestly, and channelled into creative work. A woman’s body is in a relative state of flux from the day she first menstruates. For centuries such subjects were hushed up, indeed women often didn’t have the language to talk about them at all. Due to being physically different, including less strong if it came to a struggle, due to historic and cultural reasons, women live in the world differently to men. In my workshops anything can be written about, spoken about, explored, in any form the woman writing feels it needs to take.

A lot of women need and value a space where such issues can be discussed and written about with other women. Women need a space where they can do that without the risk of being silenced by male voices. Too often men have been the reason for women’s wounds, emotional and physical, so a space away from the male is necessary for healing.

See more of Magi Gibson’s work at the link below.
www.magigibson.co.uk/

Part four of this interview is here