Home » Poetry and Spoken Word, The Monthly » The Monthly interviews Irish poet, Rachel Coventry – Part 1 – Growing up with little connection to the arts

Do you have any early memories of being attracted to the arts?

As a child I wrote little illustrated stories. I didn’t write poetry although I can remember being interested in poetry in my teenage years. There wasn’t much encouragement at home for those kinds of activities. It was a normal thing, but not important, like colouring or watching TV. 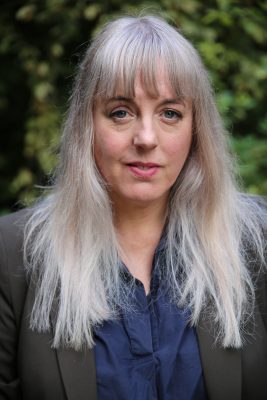 There was no support at home. What about school?

There were no writers in my family. I grew up in a council estate in Fife, nobody I knew was becoming a writer. The idea was barely conceivable. I remember Burns night and learning a few Burns poems in primary school. I remember how funny they were. In Ireland there is a big emphasis on poetry in the Leaving Certificate. I liked it, especially Patrick Kavanagh. I still remember Yeats’ “No Second Troy” by heart. I liked poetry, but I didn’t know that I liked poetry, if you know what I mean.

When I look back on it, as a working-class girl, I didn’t think that poetry, or being a poet, or a writer more broadly, was an option. I just never considered it. I wrote a few love poems as a teenager. I think my view was that poetry was a secret thing. If you wrote poetry at all, it was for yourself. Other than that, you studied dead poets at school.

Looking back, I see I was depressed by the time I left school. It was the late 80’s there wasn’t much in the way of opportunity and my mother couldn’t afford to send me to college. I basically dropped out and moved to the squats in Hackney in East London when I was around 18 or 19. It was at the time of the Poll Tax demonstrations and riots. I was into punk music, acid house and later on techno. I lived in a scene that was a strange mix of political activism and total nihilism. I was interested in the visual arts, but mostly the only art I engaged with was music. I was a part of the Free Party scene that was based in London and Europe in the 90. I spend time travelling around Europe going to free festivals. It was an amazing time, but quite dark in ways too. I’m still influenced by those experiences, there are some definitely some punk moments in my latest collection.

Around the age of 30, I decided to move back to Ireland, go to university and study for a degree. It was the early 2000s and there was a lot of financial support students then. I had planned to do English and Philosophy but I didn’t like English, so I dropped that and instead studied Economics and Philosophy and I did well in those subjects. I got funding to do my Masters on Economic Methodology; the Philosophy of Economics.

In 2008, I started a doctorate in economic methodology, but that was the start of the financial crisis and the funding I was banking on didn’t materialize, so I had to withdraw.

I arrived back in Galway and wasn’t sure what my next move was and I saw in the paper that there was a creative writing workshop run by Kevin Higgins. I signed up for that, I started to write poetry and within a year I was having poems published in magazines and I became completely obsessed with poetry from then on.