the first part of this interview is here

What maintains your enthusiasm for performing?

I have been writing and performing for a number of years. I love comedy. I love going to see comedians, and I am massive fan of stand-up comedy.

I moved into stand-up because one night an act cancelled at Mason’s and I had to fill the gap, I had 7 minutes and I threw together a few elements and played the spot.

I have been working since then on my performances. I knew it would take a fair bit of time for me to develop as a stand up; there’s a theory that it takes you 100 gigs before you really know what you are doing. It was 2016 when I did my first hour long show at the Belfast Comedy Festival, and after that I have appeared on the Blame Game, and I have taken a solo show to Edinburgh. So I have set myself goals and then set about achieving them.

I am thinking now that I have done the show in Edinburgh, I am looking at where to next.

There is a scene now in Northern Ireland which is big enough that as a stand-up performer you can look at performing good gigs once or twice a year, and there are other avenues that you can look at which really didn’t exist before.

What has changed in the last decade or so?

The Pavilion is quite important because it has been a weekly event. Mason’s has only been able to sustain itself once a month, and so as important as it is it doesn’t have a huge turnover if we keep it at 5 acts each time. Marcus Keeley’s Voicebox was important and the rise of social media has been very important. You can contact people, you can promote your material, you can also develop an audience.

Probably more importantly is the social situation. Enough time has passed that comedians aren’t hamstrung by the Troubles, and thinking that you had to write material to take account of the history of our specific situation. Rather we have a situation now where performers can experiment, they can take risks, shift the ground on which audiences will accept different ideas and ways of seeing the world.

We’ve also had the stadium explosion of UK comedy with Michael McIntyre and performers like him and Live at The Apollo and so now there is a whole new attitude to comedy.

Have all these changes made an impact locally?

To me the most surprising thing is that there are people now who actually see comedy as a potential career. This was inconceivable when I was starting out.

I can remember when “Love the Concept” was first around there was I think one other sketch comedy group in Northern Ireland that we knew about. At some points, other than the people who rose up in the 1990’s and left to perform in London or the UK, there was hardly anyone locally who you could say were making things happen.

That suggests there have been substantial changes?

Well, we could look at Shane Todd who has just sold out two nights at the Ulster Hall.

Shane, I think, would have a very career based orientation. He knows his audience and he is able to bring them on board for his shows.

I can remember a little while back there were people quite new to comedy who were saying that their aim was to play The Odyssey or The Waterfront Hall. And up till very recently local comedians would have said, and we are talking here about the obsessives, the people who just kept going regardless, that they would expect to be playing to 40-50 people in a darkened room most of the time.

Do you think social media has opened up possibilities for performers?

I think that you can see how that works for people like Shane Todd and Colin Geddis. They have built their audience, they have built a fan base and they look at then organising events where their fan base sees them live.

The older model of honing your act at open mics and then graduating to club gigs and maybe getting opportunities to play to a bigger audience, that is slowly being eclipsed by the new model of online audience building.

I can see that performers, or people who want to be performers, really need to engage with social media. I know that sometimes we can bring acts over to Mason’s who would be well regarded in the Edinburgh Fringe Festival and the comedy circuit, but struggle to get 50 people to turn up to Mason’s, whereas Colin Geddis will pack the place out.

Do you think the comedy scene is healthy at the moment?

I think you can say that you can see the development, you can see that there are options for people coming in to the scene that simply didn’t exist a decade ago. There are regular club nights, there are open mic events, there are the online options and there is an audience which has been developed over the years both by local promoters and by the comedians themselves.

That doesn’t mean there isn’t work to be done but there is a network now. Omagh has Conor Keys, Mason’s in Derry, The Pavilion, Graeme Watson’s events in Belfast, which means people aren’t stuck just playing their own town.

And it is there that we have to shift towards. We need to make more connections with circuits elsewhere. Our local comedians need to travel. We need to travel throughout the UK, and locally to Dublin and Galway.

I think if you are interested in comedy, and performing your own work, you want to see if it travels; you want to see how it lies with different audiences. So that is definitely something that everyone should be looking to do.

One final question, who would be your favourite comedian at the moment?

Patton Oswalt is someone who I look to at the moment. He was supposed to play at the Galway Comedy Festival recently and I was hoping to see him live.

He has a wonderful turn of phrase and I really enjoyed his comedy specials. 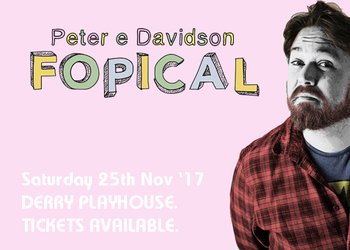 Peter has a new show “Fopical” at the Derry Playhouse on Saturday 25th November.