What did you do at The Waterfront?

Without meaning to be disparaging to people who worked there before me, I think I brought a new approach to the job. I felt very strongly that ordinary people should get value for money.

The Waterfront Hall had only been open for about 4 years at that point and I really did think that my responsibility was to the community.

I began by pulling together a community engagement plan even though no-one was asking for one, in fact I got questioning looks when I suggested that one was needed.

I was thinking that this building was built for the people of Belfast with public funds and I really did think that people in local communities should benefit. 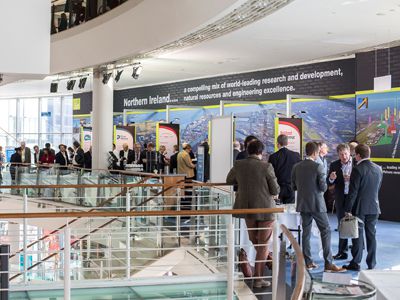 The Waterfront Hall was a mainstream commercial venue, not a community space?

Yes it was that, but I thought you could approach the space of The Waterfront Hall in a much different way and that it wasn’t just the two main rooms with a bar.

I developed these thoughts over time but I can remember asking myself, “Why can’t we use this space in a different way?”

You organised festivals and events during the months of the year that most people would consider quite a difficult period?

We did organise events and festivals during July, although it is important to say that I can’t be completely sure what my motivations were.

I feel if I am honest, that I was, for quite some time, trying to recover from having my confidence beaten out of me at school. I was, I feel, trying to build my confidence and to learn to assert my own thoughts into the new environment I found myself in.

In some ways I was the weirdo at the table, almost similar to the way I might have felt at school, although now I was being paid to put the ideas I had into practice.

We organised the Urban Arts Academy, there was the Trans Festival and we slowly started to look at that period when almost everywhere else shut down.

Around the month of July?

The question that some of us asked was “Why does everything stop?” and then from there “Why do we stop?” and finally “Do we have to stop doing things. Can we put events on during that time?”

Even if 30 or 40 per cent of people leave, that still left 60 per cent of the population with nothing to do. It wasn’t even motivated by the idea of taking on sectarianism or the Orange Order. Nothing like that at all.

If anything, it was looking at public funding and saying there aren’t any commercial organisations prepared to put on festivals or events during July so the question is, “Why don’t we use the funding that is available for exactly that purpose, to step in and support people when others aren’t making things happen?”

So you developed these ideas the longer you worked at The Waterfront?

If I had an underlying drive at all it was that we should find a way to maximise the use of the space. I can still remember my first summer at the Waterfront where, literally, people had nothing to do. I, and other people I worked with, went about changing things.

Where there was spare capacity we would offer the rooms for workshops to community organisations. We had exhibitions in the foyer areas. We would have launches of events there as well. I ran DJ nights in spaces that normally weren’t used. We had exhibitions up throughout the year.

We tried to get a good community ticketing scheme going. We would look at the shows that we had coming up and we would set aside tickets for the community groups that we had on our lists. That scheme would have put thousands of people into the space that could not have afforded to go there at the normal commercial ticket price.

Sadly, a lot of that innovative work has now gone from the Waterfront.

You talk a lot about how you can use space, Is that something that you continue to highlight today?

That’s true, but I think then there was a different starting point. I really did think that we shouldn’t just be booking commercial conferences all the time. I started to look at all the space that was available to us and then ask the question, “Why can’t we do something with this space?”

It was always about value for money. I used to look at the building, walking around asking myself “Why is this here? Could we hang a painting here? Could we make something out of this area that is never used?

Eventually you left that job and set up Seedhead Arts?

I left the Waterfront on bad terms and it wasn’t particularly pleasant. My leaving was immediate and unplanned and I wasn’t aware that it was coming.

I was actually frog marched out of the building. I had to hand over my keys. It wasn’t pleasant at all.

How do you respond to that?

I was able to assess the situation relatively quickly and I set myself up as a freelancer. I knew that despite leaving my job the way that I did, I would be able to work and I had built up enough of a reputation that there were people and organisations who would work with me.

About 2 months later I was offered the job as Director of Culture Night.

Part three of this interview can be found here