Where did the genesis of the idea for the Hit the North Festival come from?

Street Art was part of my work at the Waterfront.

We did some street art for the Urban Arts Academy, we ran street art festivals, 4 I think, and that went back to 2009. The first one was called Eurocultures 2009.

We had some help from people in Manchester and those festivals were on boards not walls. 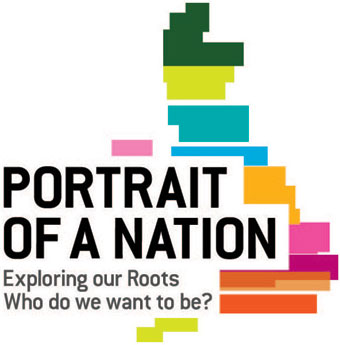 Does Hit the North flow from the work you did at the Waterfront?

It started when we took 30 young people to Liverpool to be part of City of Culture 2008, Portrait of a Nation, which consisted of youth projects from all over the UK. I started thinking about how we could represent the work we were doing at the Waterfront with UAA.

Now other people I was working with had decided to organise a contribution to Portrait of a Nation with a particular orientation. I wanted to try something different and deliver a non-traditional showcase for what was after all a non-traditional project.

Eventually we decided on building a wall inside St. George’s Hall, and we pulled together the young people who were part of the Urban Arts Academy and they were involved in that project. They worked on the wall for two days, and we had clowns, musicians, artists, and it went better than we could have hoped.

When we came back to Belfast there were discussions about what we might do here.

What came out of that?

An indoor street art festival called Winter Base. We built walls inside the Ulster hall, which had just been refurbished. We had street art, live music, it was a great event which 3000 people per day came in to see.

We also did another event, Summer Base, at St Anne’s Square, again on boards.

But something that happens with doing street art on boards is that after all the work is finished, the boards get taken down and put into storage or even binned.

When I left the Waterfront, I knew that if I was going to run a street art festival in Belfast the painting would be on walls that would have a life after the festival. 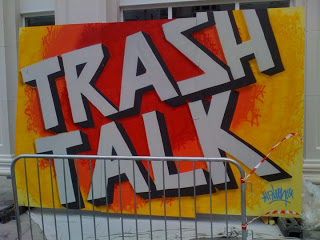 So there are a number of stages in the development of the Hit the North Street Art Festival?

Well, it is important to say that out of everything I do, and there can be a lot of stress in organising or managing events, Street Art Festivals are very stressful, possibly the most stressful to organise.

There are so many variables; the artists, the walls, landlords, police, the public, paint, weather, equipment, other street artists who might want to damage the artwork, so many variables which can go wrong.

So I didn’t really jump straight into organising anything for two years even though it is an incredible form of public dialogue that I really enjoy.

I think I thought at the time that I would leave it to someone else. Someone else could be “the street art guy”, but no-one else took up the baton.

I was approached by Eoin McGinn to help be part of something called Shutterscape, where he wanted to paint various doorways and shutters in North Street.

So Shutterscape is another part of the development process?

I have actually apologised to Eoin, but I pretty much took the initial idea and ran with it harder in 2013. Effectively he started me down a road.

Eoin was very conscious of the fact that there were vacant units around the city. However, it isn’t always easy to convince people, especially landlords that street artists should be allowed to paint on them.

Most landlords would like a blank slate so that nothing gets in the way of those units being rented or leased. It is actually easier to get permission to paint units or shops that have people in them already.

Eoin wanted to paint vacant units so we worked on making the event happen in North Street as part of Culture Night 2012.

You kept the event going?

Over the years I’ve learnt a lot about infrastructure, about development, about how even if everything goes exactly to plan, empty buildings stay empty for years.

Buildings, shops, units that lie empty can degenerate and nothing is done while people are waiting for all sort of permissions to let development happen.

My view is at least make it look pretty in the short term.

I had the same attitude to the buoys in the Arts College. I knew they were being taken away but while they were still there I asked if we could make them look interesting.

Street art is a very good medium for brightening up the city, because, it is by its very nature transitory. It can’t be permanent because development is going to take place at some stage. You lose pieces all the time.

Hit the North has visibly changed the city?

If you talk to landlords for example, you can say “look this is just an investment to you and while nothing is happening regarding development we can get artists to work on these structures at no cost to you and we expect that the art will go once development starts.” This way we hope to make the empty buildings look beautiful in the short to medium term.

The other part to Hit the North is that I wanted to work on walls. That meant continually looking for walls to paint on.

Initially the name, Hit the North, was really just about North Street, not as some people think the North of Ireland, and improving the look of that specific street.

The name seems much wider than just that street?

I am aware that you could make it mean something about coming to the north of Ireland. If you aren’t from Belfast it can have a number of connotations. A fortunate accident you could say.

We were able to get a little bit of funding from a festivals fund and we were able to attract some very impressive street artists.

Yes, in year 2 Hit the North became a partnership between Seedhead Arts and Community Arts Partnership, and CAP added the community arts element working with community groups and young people.

CAP also did a lot of the administrative side and I would work on the operation side, getting the artists, the walls, liaising with the various parties you have to liaise with to make a street art festival happen.

We now have the festival as a regular event and a street art tour which takes people around Belfast showing them the works from the artists who participate in the festival.

When you conduct the street art tour are you able to draw a distinction between the varied forms of street art in Northern Ireland?

Of course yes. It is easy to show how our various murals represent a particular view or views of the world. We can also show how the styles and the techniques are different for street art and the traditional Northern Irish mural art.

There is a common thread running though out the tour. We weave a narrative which hopefully give focus to art which I believe will bring people together.

I can remember hearing Gerry Adams being interviewed on 5Live at the time of the first ceasefire and being asked about cultural difference. The interviewer asked him what ordinary people in West Belfast understood culture to be. Was it not Eastenders, Manchester United and The Spice Girls like everyone else?

And in retrospect it’s an incredibly patronising question that reduces everyone to pop culture, but that question, about how popular culture can be an incredibly unifying thing, in many ways informed my young mind about what I wanted to do, and why popular art is a good medium to make change.