You are not originally from Northern Ireland. How long have you lived here?

Myself, (and Nikolay, my husband), I have been here for 10 years now. Actually the 30th July 2010, to be exact, is when we first arrived, so the end of July will be our 10th anniversary.

What was your background? 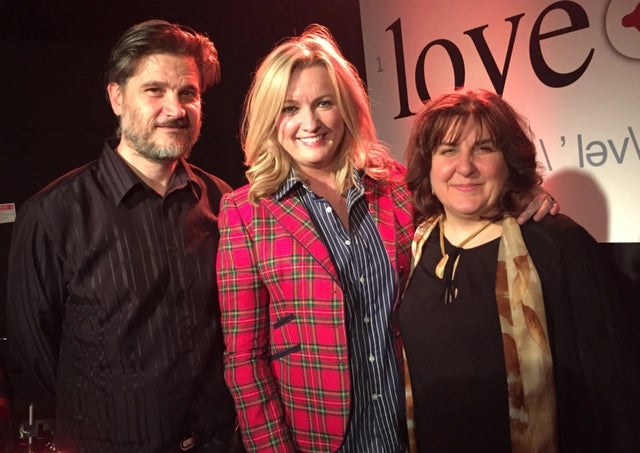 When you first started performing in Northern Ireland you worked as a duo?

Yes. In October 2010 we were offered a performance in a bar, a restaurant I think, and then little by little we were asked to play lots of different events. Eventually it felt like an avalanche of opportunities that we were being given.The first really big event we did was a concert in January 2011; an International Memorial Day to Anne Franks, and that was a very big event with people from all over the world coming to be part of that commemoration and the festival went for nearly one month.

Later on we did a big concert with an organisation called Challenge for Change in Newry, and we combined musicians from Latvia, Lithuania, Poland, Bulgaria, and also local musicians. That was really one of the first of its kind with regards the nations represented.

We have performed at many other events since then. I think there were more then 12 different nations represented at one of the “Christmas around the World” series of concerts we did with the local authorities which ran from 2011 to 2015.

You seem to have had, right from the start, an intercultural approach to the work you do. Would that be a fair assessment?

Yes we have. Bulgaria is a very multicultural country; Muslims, Christians and other faiths live together and then there are people from many nationalities who live together as well. There are Turkish, Romanian, Jewish and Bulgarian people living together. Even though there is a small population, around 7 million at the moment, it has a very diverse population.

As professional musicians we learned to play all sorts of music from different cultural and national traditions and we did that from a very young age. As professional musicians we had travelled, touring and playing, all over Europe so we performed to audiences of all kinds of nationalities and ethnicities. That has been our life. It is natural to us.

Did you feel you were breaking new ground with your approach in Northern Ireland?

I would say that we have, through our approach, tended to bring people together. Right from the very beginning people from all backgrounds, whether of different religious or national backgrounds, have trusted us. We found people were very willing to work with us and it didn’t matter where we were from. We have worked with people from an Indian background, African background, Europeans and people from all sides of the local community. We have always been trusted by people who live here. We worked closely with the Syrian community, refugees, and that surprised even the organisers of a project that we were invited to be part of. So I can say that our approach has worked well.

When did you set up Accolade?

One of the reasons we set up Accolade in 2013 was because of how well we had been received regarding the work that we were doing, Accolade is a Community Association. We wanted to use our art, our music, to reach people; to create a space where people from all backgrounds could come together and express themselves. We wanted people to experience the richness of music, to have access to music, in a way that was open to everyone. There would be no questioning of people’s allegiances or their identity; rather there would be acceptance.

Was there a peace-building element to the work that Accolade did?

We had already lived in Northern Ireland for 3 years before we set up Accolade, and we had established ourselves as musicians and performers by that stage, but we felt that we wanted to add something to what we were doing with our musical careers. We wanted to offer something back to the communities which had accepted us. Of course part of what we were doing was providing a link between the two local communities and a link between the local communities and the immigrants who had come here to live.

We did feel that people were living too much in isolation from each other. We found that very painful to witness; that people were not able to communicate with each other and we really didn’t want things to be like that. We found ourselves building links between communities through our music, being a bridge between all sorts of groups and so Accolade was the organisation which grew out of that

What was the first project that Accolade facilitated?

The community choir was the first thing we worked on. We thought it would be the easiest way to communicate with people.  Initially it was supported by Volunteer Now and it was to be a volunteer community choir and it was only supposed to last for three months.  The choir brought people together and we initiated different sorts of music, traditional songs, classical songs, we sang songs in different languages. We sang Portuguese songs, Italian songs and we tried all different types of music; traditional, classical. I think one of the first pieces we did was a Baroque piece from Italy, which we recalled recently with the choir (during the Lockdown) .

How did you go about facilitating the development of the choir?

The first rehearsal we had was in Tesco in Newry. They gave us a room for free (even now they call us “Tesco choir” form time to time), and we had nearly 30 people turn up and there were people from Nigeria, Poland, Zimbabwe, the secretary was from Argentina, and we had people from the local communities as well. Att the end of the three months there was about 50 people and everyone wanted the choir to continue.

The choir kept going even though there was no money but eventually we made a successful application to the Arts Council of Northern Ireland and we were supported for our “Sing Together” project and so the choir had something to allow it to continue. It has been a wonderful journey.