Could you tell us a little about this new exhibition?

This exhibition was initially due to open in late March and  I had been working steadily towards that deadline then lockdown happened. So after 3 months of thinking constantly about the show all of a sudden I wasn’t. It was a bit like a reset but I kept myself busy whilst waiting to hear if and when it was to eventually open.( Baucher was being modest, he had an online exhibition and talk with the Linenhall Library along with a film commissioned by the Mac entitled ‘It will pass’.)

So it’s safe to say that the lockdown changed things regarding the exhibition.  A few years ago on one of my habitual charity shop trawls, my attention was caught by a tourist souvenir album from Jerusalem. Slightly bigger than the colour postcards inside, the polished walnut cover has a rough carving of the Al Asqua Mosque. Inside, opposite the scenic postcard views of the Holylands are pressed flowers arranged very simply with protective tracing paper.  It’s a beautiful and unusual item and having lived in Israel and the Old City of Jerusalem 35 years ago it was a simple decision to buy. The album is dated December 1924  and titled “Flowers from the Holy Land”, depicting images of Jerusalem from that period.

Essentially I started  riffing off this postcard album using the idea of a tourist offer from Ballymacarrett , East Belfast where I have lived for the past 15 years.  After being shortlisted for the Freelands Award through Ps2 gallery and a visit to my studio in the Vault Artist Studio I was invited to put together a show and exhibit. I’d been documenting, picking and pressing flowers for a few years  and I was keen to explore ways to display the flowers and photographs as a celebration of the mundane and the overlooked (a constant theme in Baucher’s work).

The album has been sitting around in your possession for a decade?

Yeah there abouts.  You come across things over the years and some of them just sit as part of what you’ve collected during your life. Often I find that if something resonates with me I will keep hold of it and at some point it might become something that I introduce to my work. In recent times I have been moving more and more towards sculptural/assemblages so often items catch my eye for it’s shape or form though there is often an instant read of it’s past just by looking at it’s patina and wear and tear.  I won’t hesitate to spend a couple of quid on an item with a vague notion and I’ve used a number of charity shop and market stall finds in the exhibition.  I tend to follow my instincts regarding charity shop finds, buy it when you find it is my advice.

What shape does the exhibition take?

I’m not trying to replicate the souvenir album as such but it is my starting point. The flowers that I have been documenting grow in the cracks and pavements despite being regularly sprayed.  This failure of control is about mans insistence on measuring and quantifying everything. I decided to use what are considered obsolete tools of measurement specifically ‘imperial’ wooden carpenters/craftsmens rulers. The hinges have a range of articulations which I began to research on how to repurpose them as framing devices. Their age and patina also add to the work. I’ve tried to use them as non invasively as possible but well you know you do have to breaks a few eggs to make an omelette, so a few were  sacrificed a few  (I bought on line that were cheap knocks offs or were metric and imperial).

I also decided that I should introduce sympathetic framing elements so I crafted mahogany and walnut cradles for the slides to in for display.  I took that further by creating Samson and Goliath (the iconic H&W cranes) using architectural scale rulers and steel rulers with mahogany and walnut.

I have worked quite hard to learn how to treat the flowers, how to press them properly. My initial idea was to have the actual flower depicted in the documentary photograph …this is the flower that I photographed…a real statement of veracity. That went out the window unfortunately when I discovered that the flowers I’d pressed had rotted or moulded. Lessons were learnt and there are optimal times to pick and press flowers.

And as you said your ideas have developed over time?

The postponement and lockdown actually gave me pause to think. And well….I think it’s a better exhibition for it. I’m very happy with how this has evolved and I have to thank Peter Mutschler for his understated curatorial guidance and allowing me the space to have at it. There’s been quite a bit of lateral thinking and problem solving on how to create work that is sympathetic to the subject with what I hope folk will see as uncomplicated, elegant solutions.

Often creating work is about bringing the elements together and this coalescence took time to really show itself ( without lockdown this would be nowhere like the same exhibition). The boxwood vintage (and antique) carpenters rulers demand respect so I have been as non invasive as possible. I do like repurposing and reimagining uses for items so using cable-ties rather than perhaps brass wire to connect the rulers makes sense. It also recognises my previous usage of the utilitarian fixing.The mix of old and new appeals to me.

There are a number of underlying themes in “Flowers from the East.”

Quite a few. There is an element of reminiscence because of my time spent in Jerusalem as a young man. There is the theme of resilience and of respecting and acknowledging our industrial and built heritage. I am not alone in being upset at what is happening in our city centre and our built heritage. It should be repurposed and re imagined but not as a Noo Yawck fantasy lifestyle. And I’ve said enough now. 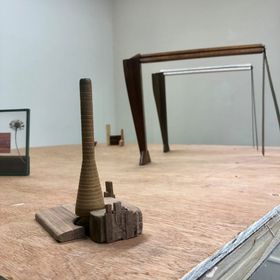 Information about the exhibition – www.pssquared.org/projects/flowers-from-the-east

See another interview with John Baucher, ‘Documenting the Undocumented‘.