What drew you to writing in the beginning?

I always loved reading and that took root even before school, but the first poem I remember writing was at school when I was eight and the teacher asked us to write a poem about our favourite colour. I wrote about the colour red. It was just a little rhyming poem, and I enjoyed it so much, and it was so much fun, and beyond that, the teacher really liked it, so I received very positive feedback. I went on to write a poem about yellow, then orange and so on. That is as far back as I can remember and I thought at the time, this is something I can do.

Did you get any support either at home or at school?

I had some really good English teachers along the way. In high school a woman called Mrs Abrams, an English teacher, was very supportive. I was in the academically talented programme at school and I was able to take a poetry class, and classes with older students if I wanted to, I got to read Samuel Beckett when I was 13. I was reading Wilfred Owen when I was 14, so while there wasn’t any one person standing over me going, “heh, you can do this,” I certainly felt like there was support for what I was doing.

Even though I went to public schools, and even though my Mum and Dad were not writers, my Dad certainly took an interest in what I was doing. He helped me learn to read, he would bring books and magazines for me, took me to museums and films.  He encouraged me. 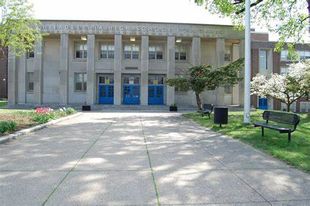 Do you go on to study Literature or English at High School?

I wanted to go to a performing arts high school and my Dad didn’t agree to that, so I went to a good public school. It was an all-girls school, the Philadelphia High School for Girls. I am really happy that I went to that school because there was never a moment when you thought you couldn’t do something because you were a girl. The weightlifting club was full of girls, the president of the student body was a girl, the band was all girls.  And it was a really good, college-prep school.

When I was coming to make decisions about college, none of my family had ever gone to college and I really wanted to get out into the world and make some money, but then I discovered a place called Hampshire College. That’s in Western Massachusetts, and it’s an alternative liberal arts college. You don’t get grades there, you don’t sit exams; instead you take classes and you would submit a research paper or project and your committee would tell you whether or not you passed that subject. The motto was, “to know is not enough” so it was more like doing a mini PHD for each subject.

You needed to learn how to synthesise information, and you needed to be extraordinarily disciplined. It is worth saying that I had to get every bit of financial support I could get to go there and I had to work three jobs, but I did it and I am glad I did.  It prepared me for life as no other education would have.

After that I went to the University of San Francisco and I did an MA there, and that was a good experience. They had a course geared for working people, where you could sit classes at night, so that suited me. Unfortunately, the city is very expensive to live in so I spent every moment working. Even though the University experience was very good, I rarely experienced anything beyond that.

Had you published anything by this stage?

No, I hadn’t. And I was working out where I was going to live. I was fairly unsettled. I had family over in Belfast, my Mum was from Belfast, and my father and mother had split up and she lived here.

I came over a couple of times and then I went to Galway and I really liked it. I was in Galway during the Arts Festival and I think I just fell in love with the city. It has a multicultural feel to it, it has an arts feel to it, and it is a small college town as well and it is a lovely place in terms of the scenery. I moved here in 1998.