What drew you to writing?

I was very shy when I was young. I liked to keep to myself and I found that reading initially, then writing, where I could go about creating my own stories, sustained me.

I found that I could create my own worlds and I enjoyed doing that. I think what sustains me even now is the opportunity to use my writing to create experiences which I can share with an audience. 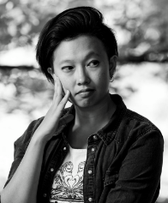 I kept a diary when I was younger and sometimes I would write poems in that and even now I can draw from my diaries to write poetry, but I think I really came to engage with poetry when I attended a creative writing class at University.

Before that though, in Singapore we have Junior College, which is the last two years of Secondary School, and you go there before you go to University and I remember doing close readings of poems and that process lead me to find all these layers of meaning within that form of writing and this was something that really clicked with me.

I liked the idea, and this strengthened as I got older, that poetry was a form of writing which was relatively quick to produce, you could layer the poem so that there were many interpretations of the ideas within the text, and you could also put in hidden meanings and you could include your own coded messages, and, with Slam Poetry in particular, you could perform the work and get feedback on what you were doing, relatively quickly.

At the risk of sounding ungrateful, there wasn’t a lot of support at home, although my mother did send me to creative writing classes and she would help me, a little, with writing stories.

There was no direct support, and I also think that when I was growing up in Singapore, I don’t think there was a lot of support regarding writing anywhere.

What about support in school?

There were some creative writing classes or programmes at certain schools but I never found myself in those schools or classes. My being shy was another thing which made me think that the arts, drama, writing, things like that were for other people but not for me.

As a teenager I would write my own stories, diaries, maybe I would even write lyrics for songs, things like that and it was all for me. It wasn’t anything I was thinking about performing especially not for anyone else to see at that point in time.

How do you find your way to poetry for performance?

I went to the United States, my Aunt lived in the US and after applying to a number of liberal arts colleges, I got into a University near where my Aunt lived, and I did some creative writing classes there.

Eventually I went to Vancouver and it was there I attended a Poetry Slam and that shifted my focus completely. I started to get hooked. I started to write and then to learn how to perform my work. I also started to break free from being incredibly shy. I got a lot of support from my college room-mate who would come to see me perform and then leave me notes about how good they thought the performance was.

I discovered slam in 2008 and I returned to Singapore for the summer in 2010 and performed in the National Slam and I ended up winning that competition.

I went to London to study and I became involved in the slam scene there and I ended up winning the UK National slam in 2012. I did very well, and often unexpectedly, in the slam competitions I entered around that time.