Home » Poetry and Spoken Word, The Monthly » The Monthly talks to poet Kevin Higgins about Over the Edge – Part 1

When did you set up Over the Edge?

We set up Over the Edge in January 2003, that was the first reading in the Galway City Library and it was Susan’s (Susan Millar DuMars) idea.

And what was the idea?

At the time we really weren’t thinking about things like the differences between spoken word or poetry or anything like that. We were thinking about writing and writers, poetry and fiction, and especially those at an in-between stage in their careers; those people who wrote poetry and fiction and who were somewhere between getting their poems published in magazines and releasing their first collection or going from reading at various open mics to being selected for a literary festival. At that time there wasn’t really any opportunities for those people to get a platform for their work.

We were, I think, looking to build a community which could sustain people, rather than, what tended to happen then, a situation where people wrote and read for a while and then slowly drifted away. We wanted something that could keep people going when things get a little difficult.

Do you think Over the Edge was a bridge between the established poetry scene and the more underground activity?

I think there may have been a bit of that although to be honest I’m not sure we thought of it in those terms.

There were open mics in Galway that tended to be quite chaotic, and I’m sure other events which came and went, but we wanted to build something that was sustainable.

We wanted to have Over the Edge as something that had some permanence about it. And there would be spaces for people so that if something else disappeared, we would still be there. You could always come back to Over the Edge.

That was another element in that we wanted to build and develop an audience. By doing that we improved the situation for everyone in that there would always be people who wanted to come just to listen, to be at the event, rather than poets and writers reading to each other. 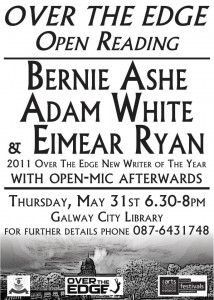 And it is still going?

Yes and in some ways I think that it matters more now than it ever did.

I think over the years there has been a dramatic shift in the way culture is approached and viewed generally and that approach trickles down to poetry. The idea that you can create something, maybe one thing, that will get you famous; that seems to be an approach which has taken hold lately. It’s an X-Factor approach to culture and I think an event which values quality and continuity is essential.

We have maintained Over the Edge for nearly 20 years with the rock solid format of 3 featured readers and an open mic. We are going to have a 20th anniversary celebration which we have already started the organising for.

Over the Edge was known for the quality of the readers. Do you feel you have been able to sustain that?

We would never put anyone on a platform if we didn’t think they were up for that and capable of doing it. It is quite different reading for 15 minutes than it is doing 1 poem at an open mic. We also have always put a fair bit of effort into who reads with who so there is a good mix and balance for the audience. We were always looking for contrast between writers and poets.

I do think that is something that is missing from Literary Festivals over the years in that the readers tend to be very similar. I have the view that this has happened since the crash of 2008, where poetry and fiction, and from there the programming of Literary Festivals, has become much more defensive, much more protective since 2008.

Could you expand on that thought?

Back in 2008, people like myself and Dave Lordan were seen, and perhaps tolerated, as amusing reminders of the politics of the past because until the crash of 2008 we were not seen as having anything resembling a live relevance or threat, and this was despite the anti-war movement and other movements which emerged before the crash.

In the South of Ireland you had articles in the Irish Times asking why people were not up in arms about cuts and things like that and of course the water charges movement seemed to shift attitudes when it emerged.

Since then you have had the situation with the Mother and Baby Homes, the Repeal of the 8th Amendment , the electoral collapse of the Labour Party, the rise of Sinn Fein (and other left forces) and the overarching of the Trump years and I think because of all that there is, or has been, a tendency, particularly in Literary Festivals, to try and cling on to the ideas of prior to the crash

Effectively, when there was a Liberal consensus of some sort it allowed more people who might have been seen as eccentrics into the mix but almost all of that has gone now.

Over the Edge is an antidote to that situation.

Going back to Over the Edge, how was it funded?

When we started off we couldn’t pay anyone because we had no funding. Then we received 400 Euros from Galway City Council which we used to pay travel expenses for people travelling outside of Galway. At the time we really did think that we were very privileged being able to do that.

We have always been pretty careful with the funding we got because in the early days, funding was pretty scarce and you could lose funding through no fault of your own through austerity and various other reasons. We still pay people, travelling writers and people who have published a book.