Were you conscious of your thematic orientation?

I think so. Even in the early days of Muck Island, we decided to write about the mythologies, the local histories of where we lived and what we had lived through, and we were conscious of the contemporary situation, too, of course. I believe I was challenging the orientation from both sides, whether that was in Muck Island, or The Mason’s Tongue publications, and in individual poems like “Stone Head ,Stone Heart, Stone Hope”, I was looking at a different approach than sectarianism.

It was definitely coming from a dissenting spirit, and that didn’t have to be an Ulster dissenting spirit, but it was a spirit which was trying to hold up both traditions, both extremes, in the place where you lived, to examination. You were aiming for that stance of “radical neutrality”. I was very aware of whatever was motivating me was not trying to say that one side was totally right and one side was totally wrong, but rather that both sides were right and wrong in certain crucial ways, with no one having a monopoly on the ‘truth’. 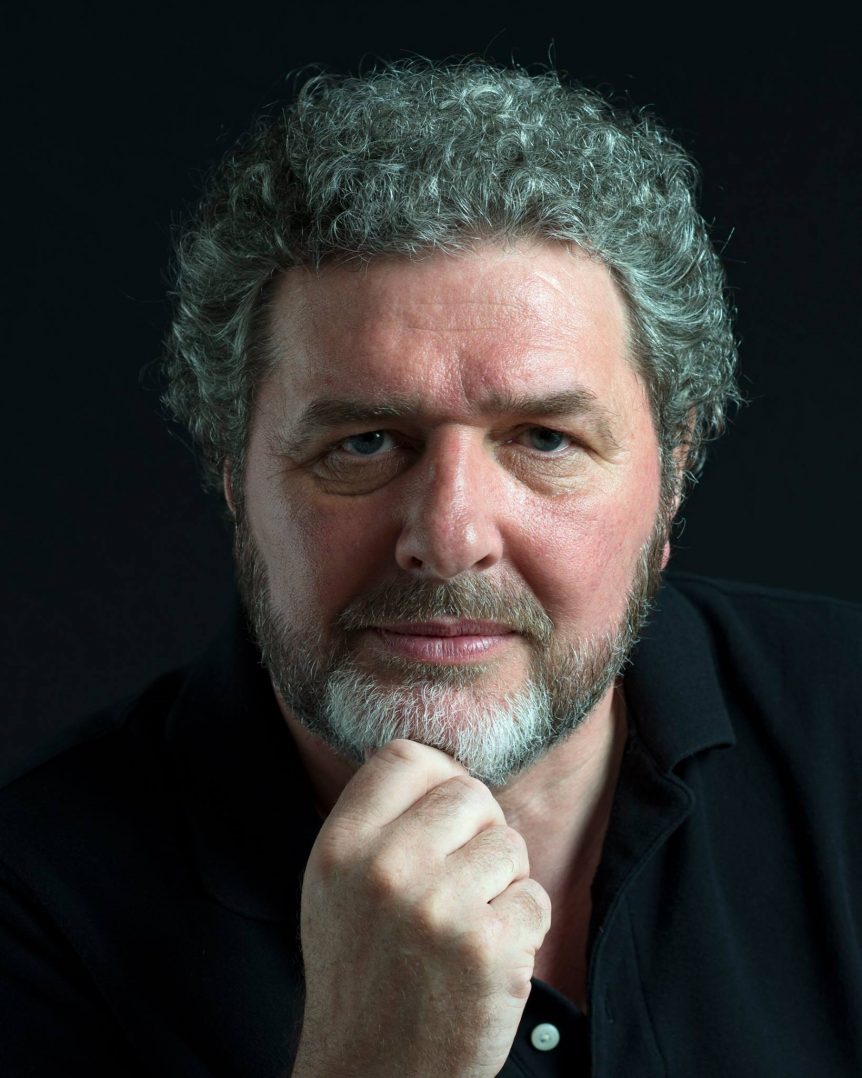 I did think that we were arguing, clearly, that people should put the guns down and at the very least get into a dialogue, but I think we were aware that it had to be much more than that. There were a lot of us who were doing this sort of work and making these sorts of arguments. We were, as I said before, part of a cultural underbelly, so to speak, trying to raise the voice of peace amid the clamour of sectarian war.

What about moving to America? How did that impact your writing?

I think that I have been looking at underlying motivations in my life, and in other people’s lives. I think that was always there but in the US I think I have been looking much more at writing about the mystery of life, not just the mysteries of sectarianism. I’m not saying I didn’t always aim to do that but I think the thing that fascinates me most at the moment, especially with a new book in the works – I have actually written more books living in the United States than I produced living at home – is how my approach has shifted after moving to America.

Do you think it made a substantial difference?

It might be ridiculously obvious to say, but it really fascinates me that my life ending up in the United States has meant that I have certainly written very different poems, or at least I certainly feel that is the case, from what I would have written if I had stayed in Northern Ireland.

There are so many different perspectives that I have because I live in America and I wouldn’t have had those experiences, obviously, if I hadn’t left home. I am in the process of doing a doctorate at the moment (my first one was stolen from the boot of my car in Rathcoole – that’s another long story!), and I’m trying to finish my dissertation right now. It is called ‘Education in Poetry – Learning through Poems’. It is highly autobiographical in that it is looking at the idea of me starting out with my introduction to poetry at High School, and from there learning to be a poet, and then becoming a teacher of poetry. It also includes the ideas of poetry being used to help foster peace at home, albeit in small, indefinable, but important ways; and then bringing what I have learned about the uses of poetry back home, to working in college classrooms here, in what is now, sadly, a dangerously sectarian America.

So you would say that your writing is different because of your experiences living in the US?

A lot of my recent work looks at (not purely) American, first-world issues like local wealth distribution and poverty, and poems based on touring America on holiday, and then there’s one’s family life and later-life musings; I have also written about Northern Ireland but from the perspective of someone who has lived away from Northern Ireland for a long time now. In fact, I would suggest that moving away from Northern Ireland and living away for a sufficient amount of time has actually led me to write my most obviously Northern Irish-based poems, which appear in a sequence I’m provisionally calling “Eleventh Night”. Poems from that burgeoning sequence have already appeared in various publications including The Clock Flower, Hickory Station, and The Strange Estate, and there are a few more in the next book, The Chances of Harm.

And I think that living here, sitting on my porch in Hickory, North Carolina, has allowed me to write very freely about Northern Ireland. I no longer feel tied to Rathcoole or The Troubles in the way I might once have done. There is, I think, a longing for home, not in a homesick way, but just as part of your life experience, and sitting on my porch-perch at my home in Hickory, that was when I started to write this particular material.

The poem “Bones and Blood” is a good example of what has been happening with certain elements of my writing, and it starts off the “Eleventh Night” material. These lines quite literally flowed out onto my porch notebook one night:

“My bones are pavement, and my blood cement,
I’m the Protestant half of an Irish lament.
From the Rathcoole Housing Estate, I’m torn,
By way of Dromara and the Mountains of Mourne”.

I have a Hickory best friend, Alan Mearns, also from Belfast (us meeting here was clearly written in the heavens!), and he often asks me about my work, and one night I was having a beer with him and he was very enthusiastic about the first few lines I have just quoted. When he heard them, I remember him saying: “Flip, that’s as far from Heaney as you could get. You’re onto something, big lad!” Now, I don’t think he (just!) meant that it might be sub-Heaney … he meant that the grounds of my personal milieu were ‘prod/urban’, versus ‘taig/rural’. So I have kept writing on and off, that sequence, and there will be a separate book, I trust, based on this orientation.

Michael Longley, as you know, once said (possibly riffing off Leonard Cohen’s statement about good songs) that if he knew where Poetry came from, he’d go there. Now while we might not know where poems come from, we can know them when we see them and know where they appear. Coming from north Belfast, there was no ‘America’ in my poems when I lived and wrote back ‘Home’. No American ‘place’, or sense of an American place. Since living in Hickory, however, for the past eighteen years, and now working in Boone at Appalachian State University, American-based poems permeate my poetry, steeped in the new sense of place provided by my adopted home. But there are also still lots of poems about my native ‘Home’, some of which perhaps could only have been written in ‘exile’: poems penned about Home, from a porch in Hickory, which might have been impossible to write back Home, and would most likely have had a different slant to them – as if from a different place, again – even if so. Borrowing a phrase from Heaney, I can see how issues surrounding ‘place and displacement’ have determined the form and content of my work – both my poetry and doctoral studies.

I’m also realising, as if for the first time – strangely enough, despite my Muck Island work, and other poems from Home – that through my dissertation work, I am something of an ‘ethnographic’ poet. I mean, it’s almost silly to say it, but you start seeing your own grounded book titles as if for the first time: Muck Island, Hickory Haiku, Hickory Station, goodness, even the airy-groundedness of The Strange Estate …. A lot of the work has been based firmly on one’s ‘area’, an ethnographic approach almost, and as you write you are knowledge-building as you go along and trying to explain one’s own community, or the one you find yourself living in here, to itself and to the ‘other’; and that is a realisation, a revelation almost, that much more you are tapping into your roots, as well as into wherever you find yourself living now, and all of that together shapes your ongoing work.

Along with Alan, my wife, Molly, and as you know, my poet son, Matthew back home (all poets themselves), it’s always smarter folks who actually, strangely, helpfully, tell you what you’re ‘at’. Poet and editor, Keith Flynn, said that “[Rice] reminds us that no matter where we go, we enter the new country with the old one still strapped on our back”. And poet, prof and critic, Jeff Holdridge from Wake Forest, said that “Following in the footsteps of what was once mass immigration from Ulster to the Carolinas, Northern Irish poet Adrian Rice has become a modern land breaker of poetic territories”. Okay, then. Now I know. On we go.

You can see more of the work of Adrian Rice at the following link – www.adrianrice.com/ 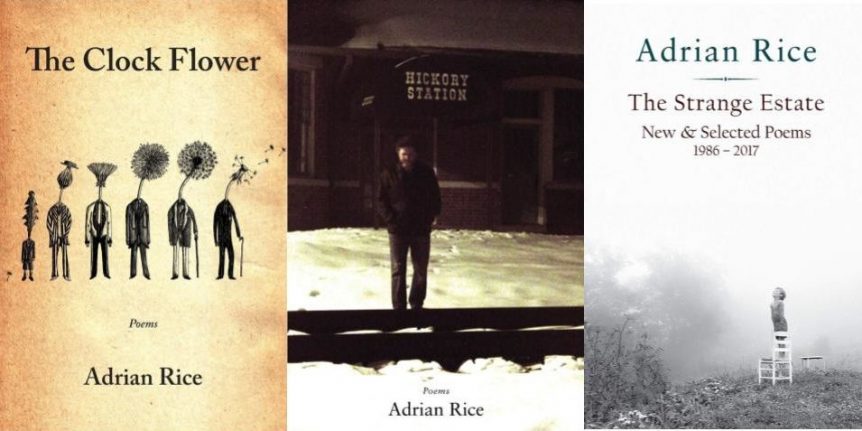